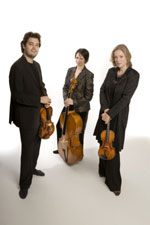 Formed in 1991, the Leopold String Trio is firmly established at the forefront of the international chamber music scene and recently received the 2005 Royal Philharmonic Society Chamber Ensemble Award:

Through the sheer brilliance and maturity of their playing, their collaborations with other outstanding performers, and their enterprise and imagination in programming, commissioning and touring, the Leopold String Trio have shown uncompromising dedication to an other-wise neglected genre, and advocacy for the richness of chamber music as a whole.

The Trio were the recipient of a 2004 Borletti-Buitoni Award which they have used to help mount ‘Leopold String Trio: The Series’, a three year cycle of concerts at Wigmore Hall and Turner Sims Concert Hall in Southampton. The Series, which began in the autumn of 2005, consists of six pairs of concerts linked by various themes, expressing the scope and versatility of the string trio repertoire. It continues in March 2007 with a Viennese School theme, including piano quartets by Brahms and Mahler with guest artist, Marc-André Hamelin. The composers introduced in the 2007/2008 season with be British/Beethoven and Eastern European, with Paul Lewis joining the group for the final concert with Dvorák’s Piano Quartet in March 2008.

The Trio was selected for the inaugural BBC New Generation Artists scheme, giving them tremendous exposure on BBC Radio 3 with many studio recordings and live broadcasts from around the country. In recent seasons they have appeared regularly at the Edinburgh, Cheltenham and Bath International Festivals.

They are frequent visitors to the world’s major venues and festivals, touring extensively through Europe, Australia, New Zealand, Ireland and Canada. They were chosen as the British representative for the ECHO Rising Stars scheme for the 2001/2002 season. This led to their debut recitals at New York’s Carnegie Hall, the Musikverein Vienna, La Cité de la Musique Paris, The Athens Concert Hall, Stockholm Concert Hall, the Philharmonie Köln, the Concertgebouw Amsterdam, Palais de Beaux Arts Brussels and Symphony Hall Birmingham. They returned to Brussels in November 2006 with a programme of Boccherini, Ysaÿe and Mozart, which they also performed at Tilburg University, Holland and the Geneva Conservatoire. This season includes return visits to The Sage Gateshead, Amsterdam’s Concertgebouw, Edinburgh’s Queen’s Hall, The Sheldonian Oxford, Reading Concert Hall and West Cork Chamber Music Festival, Ireland.

Their repertoire reflects a desire to seek out and pioneer lesser-known masterpieces as well as a strong interest in contemporary music. They have given the UK premieres of Kurtag’s Signs, Games and Messages, Henze’s String Trio, and the world premiere of David Matthews’s Second String Trio, all from the Cheltenham Festival, and the world premiere of a trio by Judith Bingham at the Wigmore Hall. All these premieres were broadcast by the BBC.

All three members of the Trio enjoy a varied musical life away from the ensemble. Isabelle van Keulen and Lawrence Power are much in demand as soloists and have worked with most of the major European orchestras as well as in North America, the Far East and Australia. Isabelle also works as director-soloist with various chamber orchestras world-wide. Lawrence is a member of the Nash Ensemble and was the first British winner of The William Primrose International Viola Competition in Canada. Kate Gould is a member of the London Bridge Ensemble, Olivier Ensemble and Chamber Orchestra of Europe. She frequently appears as guest principal cellist of the Scottish Chamber Orchestra, Northern Sinfonia and BBC Scottish Symphony Orchestra. All three members give many recitals with their respective duo partners.