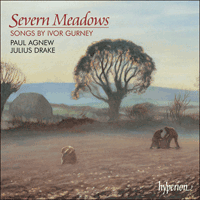 The life of Ivor Gurney was one of the most tragic in English musical history. A chorister in Gloucester Cathedral Choir at the turn of the century (along with Herbert Howells and Ivor Novello) he was later conscripted into The Great War where he was gassed in the trenches. This experience unhinged his mind and the last few years of his life were spent in an asylum.

Gurney was a prolific poet and the composer of some of the most beautiful songs in the English language, many of which are included on this disc. Some are comparatively well-known (I will go with my father a-ploughing; In Flanders; Down by the Salley Gardens and the five 'Elizas'); many are not. The moving 'Severn Meadows', which gives the disc its title, sets his own nostalgic poem written in the trenches.

‘Another fine addition to the Hyperion treasure-house of vocal recordings’ (The Penguin Guide to Compact Discs)
‘If … at the very thought of hazy June fields, your eyes mist up or you feel a lump in the throat, then this record is for you. On it, the tenor Paul Agnew sings, exquisitely, 25 exquisite songs by Ivor Gurney. The songs themselves … are without exception minor miracles of controlled pathos and these performances do them more than justice’ (International Record Review)
‘Gurney’s turmoil surfaces the songs in Paul Agnew’s sublime Hyperion disc’ (Classic FM Magazine)
‘A prize release for English song connoisseurs’ (Music Week)

Ivor Gurney composed at least three hundred songs, of which just over one hundred have been published. That process began during his lifetime with a dozen or so individual songs in 1920 and 1921, accelerated in 1923 and 1926 when the Carnegie Collection of British Music issued his Housman cycles, Ludlow and Teme and The Western Playland, and reached a climax in 1938 when the Oxford University Press issued two volumes of ten songs, following them with similar collections in 1952, 1959 and 1979. More recently (2000) the Ivor Gurney Society has assisted in the publication of his Seven Sappho Songs. A biography, The Ordeal of Ivor Gurney (1978), and the publication of his Collected Poems (1982) and Collected Letters (1991), have further added to an appreciation of his remarkable talents. Whether more songs can be rescued from the remaining manuscripts is a matter of editorial conscience. Like many of his poems, they suffer from lapses of syntax and logical thought progression. Some are incomplete, and some are frankly incoherent. Everything depended on the state of his mind at the time of composition. But while it is possible to tease out at leisure the underlying logic of a troubled poem, music has to make its effect as an immediate statement. It is not an event that can be mulled over. Unless major editorial interference is thought to be permissible it is therefore better to leave unpublished those songs that fall critically below his best.

Such considerations, however, do not concern the present selection. This covers the whole of his effective creative life—a lamentably short period, beginning in 1913/14 with the Five Elizabethan Songs (known, affectionately, to Gurney and his friends as ‘The Elizas’). In terms of clarity of texture they stand somewhat apart from the typical Gurney song—the accompaniments having been originally designed for two flutes, two clarinets, two horns and harp. The score has not survived, but something of its nature can be felt in the arrangement for string orchestra that Gerald Finzi made in 1943 (Hyperion CDA67065). Of the five songs Gurney is known to have written in the trenches, the four included on this disc are united by two overwhelming emotions: a longing for the beauty and solace of his beloved Gloucestershire, and a stoic acceptance of the possibility of death. The intensely dramatic scena By a Bierside, to words by John Masefield, is dated ‘Laventie, August 1916’; In Flanders, to words by Gurney’s Gloucestershire friend Will Harvey, was completed on 11 January 1917, at Crucifix Corner, Thiepval. Severn Meadows, a setting of Gurney’s own words, is dated ‘Caulaincourt, March 1917’, while that of Sir Walter Raleigh’s valedictory Even such is time was composed at Arras in June 1917. Gurney may have intended to orchestrate By a Bierside. His friend Herbert Howells (another Gloucestershire composer) certainly thought so, and therefore provided it and In Flanders with a suitably grand orchestration (Hyperion CDA67065) for performance at an end-of-term concert at the Royal College on 23 March 1917.

The songs in this collection belong to that intense period of creativity that followed Gurney’s release from the army and his incarceration at Dartford, the majority being composed between 1919 and 1921. Each is typified by an exceptional sensitivity to word-setting, in which long, flexible vocal lines are projected against a background accompaniment enlivened by delicate figuration. The emphasis is on catching the overall mood of each poem—there being little attempt to illustrate dramatic or pictorial details. Only the setting of W B Yeats’s Down by the salley gardens opts for a foursquare ‘tune’ (albeit one of singular beauty and folk-like inevitability), the typical Gurney vocal line springing directly from the natural inflections of the poem.

Though he ranged wide in his choice of poems, Gurney is unusual among composers in his love of, and affinity with, the poets of his own generation. It is easy to imagine the eagerness with which he must have greeted the publication (between 1911 and 1922) of the five anthologies of contemporary verse that Edward Marsh and The Poetry Bookshop issued under the title Georgian Poetry. If anyone deserves to be regarded as ‘The Georgian Composer’, it is Ivor Gurney.