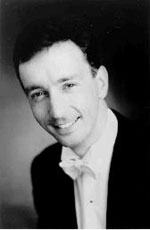 Paul Agnew was born in Glasgow and read music as a Choral Scholar at Magdalen College, Oxford. An outstanding interpreter of the baroque and classical repertoire, he is rapidly emerging as one of the finest talents of his generation. In concert Paul Agnew works regularly with the world’s leading conductors. Notable appearances include King Arthur with the Monteverdi Choir under John Eliot Gardiner, L’Enfance du Christ with La Chapelle Royale under Philippe Herreweghe, Joshua with the Academy of Ancient Music under Christopher Hogwood, Bach’s B minor Mass and cantatas with the Amsterdam Baroque Orchestra under Tom Koopman, Bach cantatas with the Orchestra of the Age of Enlightenment and Charpentier’s Médée with Les Arts Florissants under William Christie. A committed recital artist, Paul Agnew has appeared with the lutenist Christopher Wilson in Paris, London, Montreux and Vienna. Operatic engagements to date include acclaimed debuts at the Palais Garnier in the title role of Hippolyte et Aricie at the Aix-en-Provence Festival, Telemaco (Il ritorno d’Ulisse in patria) under Trevor Pinnock, Septimus (Theodora) with the Gabrieli Consort, Bach’s St Mark Passion with the Amsterdam Baroque Orchestra on tour to Vienna, Amsterdam, Rome and New York, Monteverdi’s L’Orfeo with Early Music Vancouver, Les Indes Galantes for the Opéra Bastille, Monteverdi’s Vespers with the Rundfunk-Sinfonieorchester Berlin, Bach’s St Matthew Passion with the Amsterdam Baroque Orchestra in Japan, Bach’s St John Passion with the Brooklyn Academy of Music in New York, Il Combattimento di Tancredi with the English Consort and Handel’s Solomon with the Gabrieli Consort.