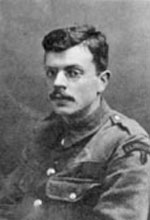 born: 28 August 1890
died: 26 December 1937
country: United Kingdom
Ivor Bertie Gurney was born on 28 August 1890 at No 3 Queen Street, Gloucester—a house whose cramped quarters served both as home and workshop for his father’s tailoring business. Though the family lived in modest comfort, work inevitably took precedence over any pretensions to culture. It was therefore a singular stroke of good fortune that a local curate volunteered to stand as godfather at the boy’s christening. That curate, Alfred Hunter Cheesman, took his duties seriously and actively encouraged the young boy as he began to discover artistic gifts that inevitably estranged him from the rest of the Gurney family. He watched over him when he became a chorister of Gloucester Cathedral, allowed him the run of his extensive library and supported him when, in 1906, he enrolled as an articled pupil of the cathedral organist, Dr Herbert Brewer, thereby announcing his intention to make music his career. In 1911 an open scholarship of £40 per annum (plus a matching sum from Cheesman) enabled him to attend the Royal College of Music as a composition pupil of Sir Charles Stanford. In due course he obtained his diploma and had war not broken out in August 1914 would have begun to carve out a career. Instead, he immediately volunteered for army service—only to be turned down because of poor eyesight. In 1915, however, the army was less inclined to pick and choose. On 9 February he was drafted into the 2nd/5th Gloucesters Battalion. By May 1916 he was in France, serving as a private.

Letters from the trenches show that he endured the dangers and discomforts of front-line service with remarkable cheerfulness. Buoyed up by the comradeship of his fellow soldiers, he seems to have felt a sense of ‘belonging’—of no longer being an odd man out. He was, if anything, at peace with himself for the first time in his life. He was even able to write songs in the trenches—though poetry now became a more practical means of self-expression. Severn and Somme, his first volume of poems, was published in 1917. But in that same year, on Good Friday, he sustained a minor bullet wound, and in September, on or about the 10th, inhaled poisoned gas. The actual amount seems not to have been large, but when added to a degree of shell-shock it was sufficient to invalid him back to Blighty. Deprived of the comradeship of the trenches, his progress under the care of the various war hospitals in which he was placed was marked by increasing mood swings, culminating in June 1918 with a serious threat of suicide. Even so, he was soon deemed fit enough to be discharged and in October 1918 he returned to Gloucester to pick up the threads of his career as best he could.

He resumed his scholarship at the Royal College in January 1919, studying this time under Vaughan Williams. Songs and poems (a second volume, War’s Embers, appeared in 1919) now began to pour from him—but, even as they did, his behaviour became increasingly erratic and unpredictable, so that in April 1921 he was obliged to abandon his studies. He returned to Gloucester, but was unable to hold down any job, musical or otherwise. His behaviour now grew so alarming that in September 1922 his family felt obliged to commit him, for his own safety, to the care of the local asylum. In December he was transferred to the City of London Mental Hospital, Dartford, Kent, where his ability to compose music, or write poems, gradually crumbled into incoherence. He died, from pulmonary tuberculosis, on 26 December 1937.

Much ink has been spilled over the nature and cause of Ivor Gurney’s mental deterioration. At first it was thought that his wartime experiences were wholly to blame. Later commentators favoured an inherited tendency to paranoid schizophrenia as the explanation. The most recent research, however, suggests that the origin of his decline is most likely to be found in a sexual indiscretion during his student days, almost exactly mirroring the circumstances that brought about the premature deaths of Schubert, Schumann, and Hugo Wolf!