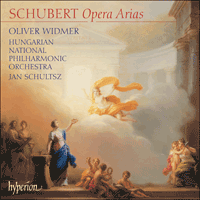 Of all the great composers, Schubert left by far the largest number of uncompleted works: symphonies, piano and chamber music, songs, choral music—and operas. Three of the latter are represented on this disc—the early 'Adrast' and 'Die Burgschaft', written around the age of twenty, and 'Der Graf von Gleichen' from the penultimate year of his short life. Schubert made many attempts to achieve success on the Viennese operatic stage but was singularly unlucky in doing so. Consequently none of his operatic music ever entered the repertoire and today it remains the most unknown aspect of his work. Therefore this disc is an assembly of some very rare music indeed, most of which has never before been recorded. Indeed, most of these operas and singspiels have never been professionally mounted since they were written. Schubert's fellow-countryman, baritone Oliver Widmer made his Hyperion debut on Volume 4 of our complete series of Schumann songs with Graham Johnson (CDJ33104). For this recording he travelled to Budapest and the Hungarian National Philharmonic Orchestra.

‘Schubert lovers will find many delights in this cross-section of baritone scenes and arias, several recorded for the first time. Hyperion's documentation … is in a class of its own’ (BBC Music Magazine)
‘A collector’s item’ (International Record Review)
‘Hyperion’s walk-you-through tour of some of the highlights of this forgotten music is welcome indeed – it’s all first-rate music. Quite simply, an exemplary presentation … and I recommend it with considerable enthusiasm’ (Fanfare, USA)