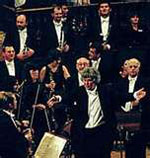 The story of the National Philharmonic Orchestra began in 1923, with the formation of the Metropolitan Orchestra, which rapidly became one of the pillars of Hungarian musical life. It was founded by Dezső Bor who was its chief conductor for fifteen years. These years saw a host of foreign guests, conductors and soloists working with the orchestra.

1952 proved to be a turning point in the orchestra's history when János Ferencsik was appointed principal conductor, it proved to be a match made in heaven. In the 1960s, a new wave of guest conductors took up invitations to conduct the musicians and their names read like a Who's Who of the profession. With János Ferencsik's death, an entire era in the orchestra's history closed but in 1987, an ideal replacement was found, the Japanese conductor Ken-Ichiro Kobayashi. Kobayashi enjoyed immense popularity in Hungary and he directed the orchestra for ten years. The next major change for the orchestra occurred in 1998 when it was renamed the Hungarian National Philharmonic and together with the Hungarian National Choir, was nominated as supreme national basic institutions.