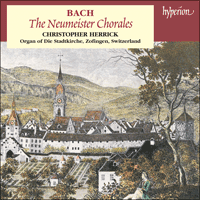 The pieces on this disc originate from an extremely exciting discovery from 1985—a manuscript anthology of chorale preludes, compiled by Johann Gottfried Neumeister in the last decade of the 18th century and identified as containing over 30 previously unknown chorale preludes dating from Bach's formative years.

There is tremendous variety and imagination in this collection and these little-known pieces surely deserve to be more widely appreciated, hence this recording as part of Christopher Herrick's complete survey of Bach's organ works for Hyperion. They offer a fascinating insight into the development of the young composer and also give glimpses of the man he was to become.

‘Early—yet highly innovative—Bach in attractive performances, enhanced by the beautiful sound of this Metzler organ … This instrument is one of the most beautiful organs I have ever heard, and Herrick exploits every conceivable combination of stops to achieve a pleasing variety of colour’ (Gramophone)
‘The cleanness of tone is matched by Herrick's sober and dignified approach, in which the music is simply allowed to speak for itself. Herrick aims not to capture the moment, but to unfold the music before us clearly and logically, and does so with panache’ (BBC Music Magazine)
‘Herrick's performances are well paced, carefully conceived and imaginatively registered; the counterpoint is always clear, and chorale melodies distinctly voiced’ (International Record Review)
‘A perfect match of music, organ and player’ (Classic CD)
‘Warmly commended’ (Organists' Review)
‘Of the several versions of the Neumeister collection, this beats the lot’ (Fanfare, USA)

While most of us dream of winning the lottery it is surely the life’s ambition of every musicologist to discover an unknown manuscript by a major composer. The sense of fulfilment must be all the greater when the discovery fills a glaring gap in our knowledge of the composer in question. An original manuscript source for a Bach organ work, known or unknown, would of course be a rare find indeed, given the paucity of such autograph material, but what Professor Christoph Wolff and Yale music librarian Harold E Samuel found in the John Herrick Jackson Music Library at Yale University was the next best thing. This collection is a vast repository of source materials for the seventeenth and eighteenth centuries and in the course of examining a manuscript anthology of chorale preludes, compiled by Johann Gottfried Neumeister in the last decade of the eighteenth century, they identified over thirty previously unknown chorale preludes dating from Johann Sebastian Bach’s formative years. (Given that much of this collection is still to be explored in detail, who knows what other treasures are still to be revealed.) Of course, the attribution of non-autograph works is a speculative business and there are those who prefer not to allow that anything less than perfection could have flowed from Bach’s pen, at whatever stage of his development. However, the inclusion of seven pieces known from other sources gave Wolff and Samuel the confidence to make their conclusions known, and to prepare the pieces for publication in 1985.

Neumeister was a teacher and part-time organist, and the emphasis in this collection on relatively simple pieces, most of which can be played without pedals, is presumably a reflection of the modesty of his abilities on the instrument. The manuscript is laid out in much the same way as the Orgelbüchlein – that is, a comprehensive series of settings for the Church year. It is open to speculation whether Neumeister was copying from an existing anthology, or whether he made his own selections from various sources, taking his cue from Johann Sebastian’s work. Whichever, it is interesting to note that 22 of the present chorales were listed but not set in the Orgelbüchlein and they include several which do not appear anywhere else among Bach’s chorale-based works. At some point the volume passed into the hands of Christian Heinrich Rinck who had studied with one of Bach’s last pupils, J C Kittel; he was a keen collector of Bach memorabilia and did much to keep his tradition alive. In all, seven composers are represented among the collection’s 82 chorale preludes with by far the most significant contributions coming from two generations of the Bach family. In addition to the 38 chorales by Johann Sebastian there are also 25 by Johann Michael Bach, a first cousin of his father Ambrosius, whose vocal music he was still performing during his time at Leipzig. (Johann Michael’s daughter Maria Barbara was Bach’s first wife.) The other composers represented are Johann Christoph Bach (another cousin), Zachow, Pachelbel, Erich and Sorge.

The preludes on Herr Christ, der ein’ge Gottes Sohn, BWV601 and Ich ruf zu dir, Herr Jesu Christ, BWV639 (recorded by Christopher Herrick on CDA66756) appear in the Orgelbüchlein and therefore represent the latest and most modern music in the collection. With this in mind, Professor Wolff has been able, with some confidence, to date the other settings to between 1700 and 1708, the period when Bach was beginning to make his way in the world as an organist, startling the congregations at Arnstadt and Mühlhausen with his bold accompaniments to the chorales. It is even possible that some date from the time when he was living and studying with his brother Johann Christoph, himself a pupil of Pachelbel, in Ohrdruf. Also known from other sources are Der Tag der ist so freudenreich, BWV719, and Ach Herr, mich armen Sünder, BWV742. These two works have also been attributed to J C Bach and Böhm respectively. In addition, the canonic setting of Ach Gott und Herr, BWV714, is known without the affecting but seemingly unrelated prelude found in Neumeister, while the first part of Machs mit mir, Gott, nach deiner Güt, BWV957, was published in the Bach Gesellschaft as a keyboard fugue in its own right. The straightforward chorale harmonisation found in the Yale manuscript finally identifies it as a chorale prelude.

The roles of organist and composer in the seventeenth and eighteenth centuries were inextricably linked, the player being expected to introduce the chorales on the organ, usually with an improvised piece which would inspire the congregation to sing with fervour. The preludes in the Neumeister collection are undoubtedly written-out examples of the sort of thing he would have had to improvise, and demonstrate that from an early age Bach had a lively and enquiring mind; he learnt by imitation, taking his examples from a wide variety of sources and very quickly improving on them. Naturally these include his father’s cousin, Johann Michael, and Pachelbel, who was his brother’s teacher, but also North German influences such as Buxtehude (the prelude on Herzlich lieb hab ich dich, o Herr, BWV1115, is based directly on the opening motif of Buxtehude’s Praeludium in C, BuxWV137). This young composer’s portfolio demonstrates a rapidly burgeoning talent and ability to improve upon his models (the harmonic command is already well advanced with much rich chromatic writing) as well as a desire to experiment, sometimes combining different chorale types within one prelude, e.g. Aus tiefer Not schrei ich zu dir, BWV1099, and Jesu, meine Freude, BWV1105. One of the finest examples is the prelude on the Christmas hymn Wir Christenleut’, BWV1090, which compresses the variety of figuration of a partita into one verse of the chorale. The three sections employ highly differentiated textures: in the first, the accompanying motif bears a close family resemblance to that in the Orgelbüchlein prelude on the same chorale, although in a different metre, while the second introduces the compound time signature of the gigue. In the final section Bach abandons the cantus firmus for a short fugal finale, based on the last line of the chorale, whose dotted rhythms perhaps suggest that he was already familiar with the French repertoire.

Attempts to produce a meaningful classification of organ chorales generally fall down because the distinctions within certain basic types can be rather blurred, and of course this becomes all the more so throughout Bach’s creative life, as he expanded the possibilities by grafting on free-standing forms to the chorale. Even in the Neumeister collection we find this multiplicity of design within a basic type, particularly that of the chorale motet. As its name implies, this derives from the vocal motet where the chorale melody appears unadorned in one voice, usually the top, against freely moving accompanying parts. Sometimes the lines of the chorale can be separated by interludes and sometimes not, and when there are interludes these may imitate the forthcoming line of the chorale or may not. In Ach Gott, tu dich erbarmen, BWV1109, Bach presents the melody in very small chunks in order to give as many opportunities as possible for pre-imitation, while in O Lamm Gottes, unschuldig, BWV1095, the lines of the cantus firmus are much longer and the imitative counterpoint of the accompanying lines bears no discernible relationship to it. Sometimes, as in Vater unser im Himmelreich, BWV737, and O Jesu, wie ist dein Gestalt, BWV1094, the degree of imitation varies throughout the piece. There are also several fine examples of chorale fughetta, where just the first line of the chorale is used to furnish a fugue subject. Wir glauben all an einen Gott, BWV1098, is a particularly fine and extended piece, while Christe, der du bist Tag und Licht, BWV1096, combines fughetta and motet in one grand design. One of the most forward-looking preludes is the lively and delightful O Herre Gott, dein göttlich Wort, BWV1110, in effect a two-part invention with chorale cantus firmus, a type he was to bring to fruition in the Clavierübung.

There is tremendous variety and imagination in this collection and these little-known pieces surely deserve to be more widely appreciated, hence this recording as part of Christopher Herrick’s complete survey of Bach’s organ works for Hyperion. They offer a fascinating insight into the development of the young composer and also give glimpses of the man he was to become. Because the collection was obviously not designed to be listened to as an integrated whole, anyone coming to it for the first time might to prefer to dip in and sample, perhaps, tracks 13, 21, 26, 30 and 31.

The recording was made in the Stadtkirche in Zofingen, Switzerland, on whose great Metzler organ Christopher Herrick has recorded the Toccatas (CDA66434) and the Clavierübung chorales (CDA67213/4). At the other end of the church is a delightful choir organ, also built by MetzIer. This instrument, though it only has one manual and the pedal has only one 16’ stop, is voiced so deliciously, and sings into such a very special acoustical space, that it was decided to record these works on it, including tracks 29 and 36 where the effect of changing manuals is achieved by brisk stop-changing by a registrant, and tracks 4 and 30 where double-tracking was employed.