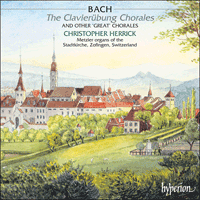 The Clavierübung Chorales & other great chorales

With the Third Part of his monumental Clavierübung Bach turned to Chorale Preludes. The collection consists of twenty-one, each appearing in two highly contrasted settings. One is a large-scale composition requiring an instrument with two manuals and pedals while the other is for manuals only and generally much shorter. There is, of course, more than one way to present the Clavierübung Chorales, but in the context of a double CD Christopher Herrick has chosen to base the first disc on the large-scale Chorale settings. The second CD starts with the ten 'manualiter' Chorales as a group, recorded in the same church, but on the beautiful one-manual choir organ. Christopher Herrick returns to the main organ for the other chorales, ending the disc triumphantly with In dulci jubilo.

All of the music on this album is also available as part of the specially priced box set Bach: The Complete Organ Works: ‘Let me say without hesitation that Herrick’s performances are models of clarity, accuracy, precision and musicality … this is a complete Bach that has plenty of character and verve and which would bear repeated listening’ (Choir & Organ).