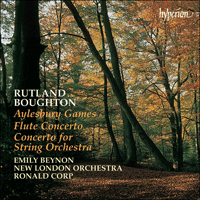 This world-premiere recording demonstrates the versatility of the English composer who for too long has been associated only with The Immortal Hour. Although there is this association with Boughton, it was as a composer of large-scale choral and orchestral works that he first drew attention to himself in the early years of the twentieth century, and it was to orchestral music that he returned in the 1920's when circumstances forced him to abandon is operatic experiments.

The Flute Concerto is wonderfully performed by the young flautist Emily Beynon—most recently heard on CDA67089, John McCabe's Flute Concerto. The Concerto for String Orchestra was never published and remained untouched from 1937 until its premiere in 1997 (the players for whom it was written found it too demanding and it took until 1997 when the Bournemouth Sinfonietta gave it its first performance). It is a wonderful piece which has been likened to the great works for string orchestra by Elgar and Vaughan Williams. Aylesbury Games had produced a similar reaction from the dedicatees (the orchestra of Aylesbury—Boughton's native town) and although it was composed in 1952 it took until 1978 for the orchestra to tackle a first performance. Sadly, Boughton therefore never heard it played.

‘Vibrant performances’ (The Daily Telegraph)
‘A welcome release. Beynon is enchanting in the Flute Concerto, while the Aylesbury Games Suite and Concerto for String Orchestra are lovely repertoire revivals’ (Classic FM Magazine)
‘Emily Beynon gives a dazzling account of the Flute Concerto … this is a lovely, loveable CD, and no one who likes a good tune should be without it’ (Fanfare, USA)

Most histories of British Music acknowledge Rutland Boughton’s contribution to opera, mentioning in particular the enormous success The Immortal Hour enjoyed in the 1920s. Yet it was as a composer of large-scale choral and orchestral works that he first drew attention to himself in the early years of the twentieth century, and it was to orchestral music that he returned in the 1930s when circumstances forced him to abandon his operatic experiments.

Born in Aylesbury, Buckinghamshire, on 23 January 1878, Boughton was a pupil of Sir Charles Stanford at the Royal College of Music. In 1905 he joined the staff of the Midland Institute of Music in Birmingham where he began to lay plans for a type of music drama (specifically a cycle of five Arthurian dramas) which would do for England what Wagner had done for Germany. He left Birmingham in 1911 and, with the help of the artist Christina Walshe (who became his second wife) and the poet Reginald Buckley, he started to put his operatic plans into practice. The result was the Glastonbury Festivals, which ran with increasing success and sophistication from 1914 to 1927. He then retired to a small farm in Gloucestershire to complete his Arthurian cycle. Attempts to revive his festival ideals at Stroud (1934) and Bath (1935) failed to take root and he turned increasingly to the composition of orchestral and chamber music. He died on 25 January 1960.

Nothing is known of the origins of the Three Folk Dances, which he composed in 1911. The likelihood is that they were written at the suggestion of John Curwen, who published the full score and parts the following year. They thus anticipate Holst’s St Paul’s Suite by two years and Warlock’s Capriol Suite by sixteen – with both of which they have much in common.

Boughton’s interest in folk music had first found an outlet in 1905 in a series of elaborate Choral Variations where his approach had been less that of a musical archaeologist than a believer in the authority of pure melody. That faith underpinned all his music, however complex its form and expression. Accordingly, the melodies of the Folk Dances are allowed to speak for themselves, even though the settings are subtle and imaginative. No actual ‘first’ performance has been recorded – unobtrusively, the work simply entered the repertoire of string orchestras, professional and amateur alike.

Much the same has to be said of the Concerto in D minor for flute and strings. It was composed in 1937, probably at the suggestion of Boosey & Hawkes, as a companion piece for the Concerto for Oboe and Strings which they had published in the same year and which had enjoyed considerable success. If Boughton had a particular soloist in mind (the Oboe Concerto had been written for his daughter Joy Boughton) it was probably John Francis, who had been part of the orchestra at the Bath Festival in 1935. (John Francis married the harpsichordist Millicent Silver and their daughter is Sarah Francis who has recorded the Boughton Oboe Concerto on Hyperion CDH55019.) Whatever the circumstances of its origins (and no specific ‘first’ performance has been recorded) there can be no doubt that Boughton intended a thoroughly virtuosic challenge both to the soloist and to the orchestra. The first and last of the three movements follow traditional forms – sonata and rondo respectively – though with a rhapsodic freedom that neatly sidesteps the predictable. The thematic material is bold and uncompromising and firmly rooted in folksong. However, it is in the second movement that Boughton’s imaginative powers show themselves most clearly. Here, a melody of great sweetness and simplicity is framed by passionate flute arabesques built on a sequence of chords that trace a rising scale, part tonal, part modal, of Boughton’s own devising. The effect is that of a shaft of sunlight momentarily piercing the mist; a sudden, brief revelation of unexpected beauty and serenity.

The origins of the Concerto for String Orchestra are somewhat clearer. Boughton composed it in 1937 for the Boyd Neel String Orchestra, probably in gratitude for their having included his Oboe Concerto in the concert at the Salzburg Festival (27 August 1937) which also saw the premiere of Britten’s Variations on a Theme of Frank Bridge. Unfortunately he miscalculated. Boyd Neel’s players found it far too difficult, and the work had to wait until 11 September 1997 for its first performance, when the strings of the Bournemouth Sinfonietta, under Alexander Polianichko, played it at the Glastonbury Arts Festival.

The work was originally titled ‘Four English Pieces’, and each movement had a title which gave a clue to its mood and nature: ‘English Overture’, ‘Scherzo at Dawn’, ‘Love Scene’, and ‘Hornpipe’. But it is not the work’s formal structures which matter – they are straightforward essays in statement, contrast and repetition; nor is the work’s thematic content out of the ordinary, being folkish and boldly diatonic for the most part, though not without certain chromatic excursions. What is remarkable is the music’s texture. Conceived mainly contrapuntally, this is adventuresome string writing of a very high order: elaborate divisis (including the use of solo instruments), trills and arpeggios, bowed and plucked strings, with and without mutes – in short, a veritable compendium of effects that render it a worthy companion to the great works for string orchestra by Elgar and Vaughan Williams, Britten and Tippett.

A similar challenge confronted the players for whom Boughton wrote his Aylesbury Games. These were completed on 23 January 1952 (his birthday) and inscribed with the words: ‘Written in the first place for my friend Charles Pope and the orchestra of Aylesbury, my native town’. Pope, who had founded the Aylesbury Choral Society in 1932 and a companion orchestra a few years later, was an enthusiastic supporter of Boughton’s music. But he was also clear-headed enough to recognise that the challenge was beyond the reach of his orchestra at the time, and it was not until 22 April 1978 that he felt able to tackle a first performance. Boughton therefore never heard his music in the flesh, but, as with many of his later works, seems to have been content with the performances he heard in his head.

Originally titled ‘Aylesbury Games round a Little Tune’, the work is, in effect, a set of three rhapsodic variations on a simple theme heard at the outset of the first movement. The first seven notes give the ‘little tune’ its character. The connection between the first and second movements is simply a matter of key change (C major to A minor) and time signature (4/4 to 6/8). The third movement, however, inverts and partially disguises the tune. Elaborate divisi passages and complex textures are again the order of the day. As for the tune itself, it is evidently Boughton’s own, though derived (probably unconsciously) from ‘The Seagull of the Land-under-Waves’, one of the Hebridean folksongs collected and published by Marjory Kennedy-Fraser that had already served Sir Granville Bantock’s remarkable Hebridean Symphony (1913). Boughton was a master of melodies so natural and unselfconscious as to be easily mistaken for genuine folksong and, as Vaughan Williams once found, could even mislead the experienced collector!