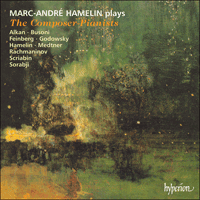 A showcase for Marc-André Hamelin, this disc focuses on the work of a group of composers, all virtuoso pianists themselves, who were fascinated by the possibilities of sound and colour inherent in the piano which could be realized by the transcendentally-equipped executant. Marc himself composes in this tradition and for many the highlight of this disc will be the three studies of his own—pianophiles who until now have only heard these pieces as encores at his recitals will be delighted that these works have finally been recorded.

While much of the music is thrillingly virtuosic there is also much which is haunting, such as the Feinberg Berceuse, and the emotional heart of the recital is surely Busoni's Fantasia nach J S Bach, written to commemorate the death of his father. Surprisingly, there is also a strong element of wry humour (also a characteristic of the performer!) which runs from the Haydn/Alkan to the Rossini/Hamelin via Sorabji.

All in all, a kaleidoscopic recital which is sure to become a classic.

‘Everything is of the most absorbing interest; everything is impeccably performed. Irresistible for pianists, this disc should be in every musician's collection’ (Gramophone)
‘Staggering feats of bravura with an effortless insouciance that defies belief. A collector's item, without doubt’ (The Sunday Times)
‘Dazzling. Best of the Month’ (Classic FM Magazine)
‘An adventurous, original programme by one of today's most remarkable keyboard talents—a piano connoisseur's dream CD’ (Classic CD)
‘Rampant supernova pianism … a Pandora's Box of riches no connoisseur will want to miss’ (International Piano)