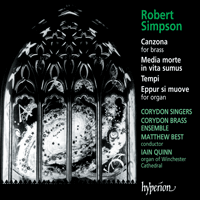 Like Beethoven, Robert Simpson generally conceived his music instrumentally rather than vocally. He confessed to being uneasy when faced with the task of word-setting. However, both the choral works recorded here resolve the problem with originality (and, in the case of Tempi, humour), leaving no doubt that Simpson's handling of choral forces is capable of a wide expressive range and great physical impact.

In media morte vita sumus ('In the midst of death we are in life') is for mixed chorus, brass and timpani. The text is Simpson's own, translated into Latin. In the composer's own words, it 'outlines a simple and practical morality without which humanity must be at lethal risk. It has nothing to do with religion, and explains itself'.

The text of Tempi consists entirely of familiar Italian musical terms ('Allegro grazioso', etc) whose meanings are reflected in the music.

Eppur si muove (Ricercar e Passacaglia) is Simpson's only work for organ and is cast in one enormous movement in two large sections. The title means 'But it does move' and is what Galileo is said to have muttered on being forced by the Church to recant his view that the earth revolved round the sun.

‘Iain Quinn joins the long line of dedicated performers who have made Hyperion's Simpson series such a consistent triumph’ (Gramophone)
‘Music of a deep and searching mind. An important release. Dedicated performances and state-of-the-art sound’ (Classic CD)
‘All the performers do the music proud. Simpson aficiados will need no persuasion to buy this marvellous disc, but enthusiasts for the organ and choral music of our century have every reason to make its acquaintance too’ (Hi-Fi News)

Despite a prolific output for brass band, the short Canzona is the only music Robert Simpson composed for orchestral brass apart from an arrangement of his brass band piece The Four Temperaments. In the Canzona there is some spiritual kinship with the brass music of Gabrieli, though the alternating calm and mystery suggest a comparison with the slow movement of Simpson’s own Second Symphony. The grandeur and cumulative power of the final bars, as the work swells to a triadic conclusion, clearly demonstrate the ‘breadth of a symphonist’, albeit in miniature.

Like Beethoven, but unlike many twentieth-century British composers, Robert Simpson’s music is generally conceived instrumentally rather than vocally. Despite his devotion to much operatic and choral music (to say nothing of his penetrating analyses of works such as Beethoven’s Fidelio and Bruckner’s Masses), he confessed to being somewhat uneasy when faced with the task of word-setting. However, both the choral works recorded here resolve the problem with originality (and, in the case of Tempi, with plenty of humour), leaving no doubt that Simpson’s handling of choral forces is capable of a wide expressive range and great physical impact.

Media morte in vita sumus (‘In the midst of death we are in life’) is scored for mixed chorus, brass and timpani and was composed for Aylesbury Choral Society who gave the first performance. The score bears the inscription ‘To Charles Pope – a necessary man’. Simpson set his own text in English but, wishing the message to be as universal as possible, asked David Nightingale to translate the verses into Latin. As the companion piece at the first performance was Beethoven’s Ninth Symphony, the work is scored for identical brass forces: four horns, two trumpets and three trombones. In the composer’s own words, the text ‘outlines a simple and practical morality without which humanity must be at lethal risk. It has nothing to do with religion, and explains itself’.

The motet takes the form of a prelude and fugue. Plenty of evocative Simpsonian sonorities emerge in the prelude: stopped horns in fifths gently oscillating, and trenchant unison declamations alternating with haunting chorale motifs on trombones. The choral writing unfolds contrapuntally. A Beethovenian drive infuses the fugue, opening with the words ‘Sic vivificabit saecula’, first announced by tenors. Here the brass scoring is more homophonic, and the type of energy instantly familiar to all who cherish the momentum in Simpson’s symphonic scherzos. The coda assumes the form of a crescendo as the initial stopped-horn figure reappears against an obsessive timpani motif.

Tempi was commissioned for the 25th Seminar on Contemporary Choral Music, University College, Cork, Ireland, in April 1988. The piece consists entirely of Italian terms whose meanings are reflected in the music.

The work is in two parts. The first embraces a familiar Simpson fingerprint, first encountered in the Third Symphony: a gradual acceleration over a long span. Hence the music moves effortlessly from ‘Adagio mesto’ to ‘Andante cantabile’, from ‘Allegretto grazioso’ to ‘Allegro con brio’, eventually unleashing a sparkling ‘Prestissimo’ which forms the culmination of the first part. There is an abundance of striking word-painting during this section; take the ‘Subito forte’ eruptions, the stampeding ‘Impatientemente’, the scampering repetitions of ‘Prestissimo’, the ominous sounds of low basses singing ‘Susurrando minaccioso’.

Part Two is shorter. It is heralded by a return of the slow tempo, ‘Lento molto intensivo’, begun by tenors and basses and later taken up by female voices. Soon the intensity eases, and the music relaxes into one of Simpson’s most magical stretches of reflective polyphony.

Composed in 1985 and dedicated to the celebrated Danish organist Svend Aage Spange and his wife Annalise, Eppur si muove (Ricercar e Passacaglia) is Simpson’s only work for organ and is cast in one enormous movement. The title (in translation ‘But it does move’) refers to the words Galileo is said to have muttered on being forced by the Church to recant his view that the earth revolved round the sun. The concept of ‘movement’ is crucial to Simpson’s art, and one is tempted to draw a further parallel here with Nielsen’s single movement organ work Commotio.

Eppur si muove consists of two large sections, Ricercar and Passacaglia, both of which are derived from a circling pattern of notes heard at the outset. In this sense the structure shows some similarity to the Sixth Symphony. The Ricercar falls into three parts, the first of which suggests the character of a chorale prelude with the chorale lines stated fortissimo on pedals. Simpson’s polyphony is at its starkest and most austere here. After a long diminuendo on a single chord, the next section emerges fluente, as gentler, rippling figures come to the fore, interspersed with fragments from the chorale prelude. This in turn leads to the third section which compresses the bars from 3/4 to 3/8 as the contrapuntal lines gain further intensity. It reaches an animated climax before subsiding into the soft beginning of the Passacaglia.

The main Passacaglia subject is strongly influenced by the opening notes, though here rearranged so that two sets of intervals are pervasive: rising fourths and perfect fifths. There are forty-one statements of this bass, during the course of which the composer traverses all twelve pitches, beginning on C sharp and ascending by semitones.

Perhaps the most serene music is contained in the opening variations where the texture is spare but spacious, as a new sense of calm evolves. An explosive outburt occurs (Variations 13 to 20) before the tranquillity is resumed once more for Variations 21 to 29. Some of the writing here is amongst Simpson’s simplest, frequently sustaining a lean, two-part texture. Tension builds once more at Variation 30, and the melodic contours become increasingly florid and densely woven until the initial chorale appears in the pedals at Variation 36. By this point the Passacaglia theme has reached C natural. Soon afterwards a quicker coda steers the music back to C sharp, on which the final climax is founded.