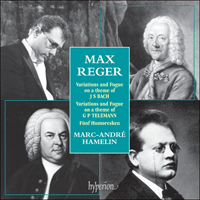 Reger's music is an amalgam of Bachian counterpoint and chromatic Romantic harmony—the result is writing of great density. This is particularly true of the 'Bach' Variations, Reger's piano masterpiece. Hamelin's superb virtuosity allows him to focus purely on the music, so keeping any sense of heaviness from infiltrating piano writing which, in other hands, can sound merely laboured.

The 'Telemann' Variations are much less chromatic, more decorative, and as a result are much closer to the Baroque concept of 'variation'. Their virtuosity is more obvious, with many opportunities for the soloist to display his fingerwork.

The Five Humoresques reveal Reger in lighter mode. Here the inspiration is surely from Brahms.

‘Others have courageously fought the cause of this complex and neglected repertoire but few, if any, have brought to it such compelling fusion of temperament, intellect, and prodigious pianistic fluency’ (Gramophone)
‘This is a marvellous disc’ (BBC Music Magazine)
‘I have never heard Reger played with greater imagination or persuasive eloquence. Hamelin seems to command an almost limitless range of keyboard colour. Those who have yet to be won over by Reger's keyboard music should start here’ (Classic FM Magazine)
‘I was enthralled’ (Classic CD)
‘An embarrassment of riches. This is absolutely first-rate playing. Quite simply this is a stunning recital’ (The Scotsman)
‘This is playing such as you seldom hear. First-rate Hyperion recording; boring superlatives, as usual, for this least boring of contemporary keyboard giants’ (Hi-Fi News)

When Max Reger was found dead in a Leipzig hotel room in mid-May 1916, his spectacles were still perched on his nose and a newspaper still rested in his stiffened hands. He was just forty-three years old. But then ‘winding down’ would never have been an option for Reger: he was unstoppably prolific, a music-machine madly in love with complex contrapuntal computations, unexpected modulations and sudden shifts in focus or colour. If one appreciates the rich splendours of fugal counterpoint, then Reger is second only to Bach in his imaginative employment of them. His scores could approximate Babel one moment, and a quietist retreat the next; he could be witty, seductive, tuneful, dry or playfully convoluted. He is, in this writer’s view, the last unacknowledged ‘great composer of the past’.

A year after Reger’s birth (in Brand, Bavaria, on 19 March 1873), his parents moved to Weiden where, a little later, his mother gave him his first music lessons. Subsequent studies with Hugo Riemann (one of the leading music theorists of the period) centred largely on the music of Bach and Brahms, with special emphasis on musical form. By then, Reger’s stylistic seal was set, though military service saw him suffer both physical and emotional trauma and he returned to the family home in Weiden. The good news was that he suddenly grew prolific, casting aside Riemann’s influence as well as earning accolades for the delicacy of his piano playing (mostly in Bach and Mozart). A new influence was the Anglo-German organist and conductor Karl Straube, and thereafter the rich flow of Reger’s organ works—music that greatly extended the instrument’s expressive vocabulary—regularly enriched the repertory.

After moving to Munich and marrying Elsa von Bagensky, Reger was forced to supplement his income by teaching. He was a rigorous proponent of musical logic and solid techniques and, although revelling in the disciplines of variation and sonata form for his solo and instrumental works, did not actually employ the orchestra until the creation of his lovable but discursive Sinfonietta in 1906. He spent two years in charge of the Meiningen Orchestra (1911 to 1913), constantly working towards increased transparency in his own music (and largely succeeding), then transferred to Jena, planned a lengthy oratorio and a symphony (neither of which he lived to complete), suffered a heart attack and died.

Reger was known as generous, fun-loving, vulgar and wickedly humorous (not least about himself). On one occasion, when an admirer complained that he could only see Reger’s back on the podium, the mischievous conductor-composer played on the palindromic aspect of his name by replying, ‘I am no different front or back’. Some critics might have responded to that remark with a wry smile and a knowing nod of the head.

In his latest work … Professor Dr. phil. h. c. and Dr. med. h. c. Max Reger [sic] demonstrates that the painful complication of asthmatic invention and dropsical swelling of fracture of which he is known to have suffered for a long time, has now become chronic. In the first movement, amid the familiar commotion there stare at us some thematic fragments reminiscent of Brahms, Liszt and Grieg … in the Finale an insane army of churlish, tonality-free chords blunder into a somewhat more amiable kobold of a fugato and trample underfoot a frightened little elf of a melody which becomes somehow entangled in all this.
(Translation quoted from Nicolas Slonimsky’s Music Since 1900, fifth edition, Schirmer, 1994)

As it happens, Slonimsky himself compounds the offence in his death notice for Reger, where he reports an ‘aridity of imagination and infertility of invention’ that made Reger’s music ‘lifeless’. Clearly, the hot-headed defence needed to justify dodecaphonic or aleatoric writing, minimalism and other radical digressions incorporated a necessary offensive against the tried and the tested. Nowadays, with all manner of schools and movements being reopened to question, we can once more cast a reasoned eye at nonconformist purveyors of tonality, those brave men and women who wrote what they wanted to say. And when critical reparations are meted out, Max Reger should be first in line to receive them.

Variations and Fugue on a Theme of Johann Sebastian Bach Op 81
Reger’s dedication to Bach bore especially rich creative fruit, not only in the noble ‘Bach’ Variations recorded here, but in a number of ingenious keyboard transcriptions, not least the complete orchestral Suites and Brandenburg Concertos (arranged for piano four hands), and the two-part Inventions, various Preludes and Fugues from The Well-tempered Clavier and sundry Fantasias and Toccatas (refashioned for organ solo). The Variations and Fugue on a theme of Johann Sebastian Bach dates from the summer of 1904, a period that also saw the births of James Joyce’s Ulysses, Delius’s Koanga, and Charles Ives’s March 1776. The times were certainly a-changing, and although perennial in their eloquence and vitality and the uncommon richness of their modulations, the Variations are nonetheless rooted in the musical past, much as Bach’s own music had been.

The prompting theme is taken from the beautiful contralto/tenor duet ‘Seine Allmacht zu ergründen, wird sich kein Mensche finden’ (‘No man can fathom His omnipotence’) which is, in turn, from Bach’s Cantata No 128, Auf Christi Himmelfahrt allein. Reger asks for the melody to be played ‘sweetly and always very legato—that is to say, like an oboe solo’ (Bach’s original is scored for oboe d’amore and continuo) and, while treating it to appreciative pianistic colours, opts thereafter to home in on particular elements of the theme rather than to vary it ‘whole’. The first two variations extend the mood among some gentle elaborations while the third, with its coruscating climaxes and undulating accompanying figures, breaks the mould with typical chromatic boldness. Reger canters off apace with his fourth and fifth variations, makes wrist-straining demands on his pianist in the sixth (a lusty Allegro molto), and then slams on the brakes for an introspective Adagio, hinting at the C major tonality that will dominate the energetic eighth variation. The deeply expressive writing that follows recalls a parallel passage roughly halfway through Beethoven’s ‘Diabelli’ Variations (Variation No 14) where, as here, the mood suddenly darkens to questioning introspection—though not for long.

But Reger, like Beethoven, was wont to break his own spells. After a lively Poco vivace and an agitated Allegro in C sharp minor, he sustains what initially sounds like a noble Sarabande, before whisking us back to the home key with two quick final variations. But this is by no means the end of the matter. There is the Fugue, a colossal, three-tier edifice, the first two episodes being four-part fugues (Bach’s original melody reappears in the treble towards the end of the second), the last section combining them both for a towering grand finale.

Five Humoresques Op 20
The earliest of Reger’s piano works programmed by Mr Hamelin are also the lightest in tone. Reger himself made a piano roll recording of the fifth of his Humoresken, an elfin Vivace assai with a chorale-style Più tranquillo central section. The rest are as charming, diverting and quietly inventive as the best of Brahms’ lighter short pieces. The first is a perky Allegretto grazioso, again with a chorale-style ‘trio’ (Più meno mosso this time) and a tumbledown return to the first idea. The second opens to a bar’s worth of fortissimo Presto before proceeding in a mode ‘à la hongroise’. Liszt comes to mind, as do Dvorák, Brahms, and even Bartók. The third Humoreske is a winning Andantino grazioso in 2/4 with a more thoughtful Meno mosso central section and a delightful coda, while the fourth is a vivacious, waltz-like Prestissimo assai. All are delightful and further proof that Max Reger could complement even the heaviest musical meal with delectable sweetmeats.

The theme itself is taken from a Suite for two oboes and strings that Telemann composed around 1733 as part of his Tafelmusik. (Listeners who fancy ‘checking out’ the original are directed to the Suite, or Ouverture, that opens the Tafelmusik’s ‘Production III’. The Menuet is its seventh and final movement. The Suite has been recorded by The King’s Consort on Helios CDH55278.) Reger’s first statement of the theme immediately suggests parallels with Brahms, whereas the first four variations provide straightforward embellishments in a similar vein, whether regal (No 1), swirling (No 2), slipping (No 3, with staccato triplets) or dancing (No 4). The gigue-like fifth variation leads to octave triplets in No 6, Chopinesque cascades in No 7 and octave leaps in No 9.

Variation 10 (Quasi adagio) marks a dramatic easing of pulse; No 11 picks up the tempo a little, and No 12 fires gunshot chords that scatter flurries of repeated notes. The thirteenth variation is elegant and lightly brushed; No 14 tucks sustained trills in among its already dense textures, and with No 17 we move to the shaded glades of B flat minor before madcap arpeggios (No 18) signal a return to the home key (in No 19) and a warming Poco vivace (No 21).

The next two variations mark a return to pianistic athletics, but with No 23 we reach a majestic, richly harmonized chorale-style melody and a desolate bridge to the closing Fugue—more playful than Reger’s ‘Bach’ Fugue, and rather less complex, save for the expected broadening around the peroration. Beethoven comes to mind here, especially in the central section, which slows perceptibly only to build again—a ploy that Beethoven used at the centre of his Hammerklavier Sonata’s fugal finale.