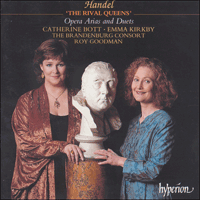 Seventeenth-century London was gripped by a passion for Italian opera. Two soprano divas held centre stage—Francesca Cuzzoni and Faustina Bordoni, represented here by Catherine Bott and Emma Kirkby respectively—and both quickly won a fiercely partisan following among audiences. The Royal Academy of Music cynically exploited this rivalry by repeatedly engaging the two to sing roles which would bring them into conflict, in 'stage' and 'real life' personas. (The unfortunate result of this scheme, which could almost be said to have worked 'too well', was that over-enthusiastic audiences rioted, the Academy fell into disrepute and debt, and closed in 1728.)

In these operas we find Alessandro being fought over by his two wives; Admeto with a dead wife returned to disturb his courting of an old flame; Riccardo (Richard I of England) being harrassed by the daughter of the tyrant who has kidnapped his fiancée; Siroe attempting to court his father's enemy's daughter while being pursued by Laodice whom his father loves; Tolomeo looking for his wife who is being pursued by the King of Cyprus whose sister is after Tolomeo …

‘This CD is appealing on every plane. It's certainly one of my discs for 1997’ (Gramophone)
‘The voices contrast well, and their owners, as well as The Brandenburg Consort, perform this wonderful music with style and an intense sense of affection’ (BBC Music Magazine)
‘Right on cure for the bull market in Handel operatic stock,'The Rival Queens' conquer all before them. A right royal feast!’ (Classic CD)
‘Immensely enjoyable’ (Goldberg)
‘Resplendently produced in the Hyperion manner … the singing is so gloriously stylish here that Handelians will probably grab it up without much urging’ (San Francisco Examiner)

The greater part of Handel’s working life was devoted to composing and performing operas. In his native town of Halle his early training under Friedrich Zachau had been in church music, but in 1704 he left to join the orchestra of the opera house at Hamburg. Within the year he wrote his first opera, Almira, in the eclectic style of Reinhard Keiser, then the leading Hamburg composer. The broad model was the Italian opera seria, with set-piece arias in da capo form (two contrasting sections completed by an embellished repeat of the first section), but varied with comic interludes in a popular German style and dances in the French manner. Three more operas for Hamburg followed, all regrettably lost apart from a few fragments. In 1706 Handel went to Italy to absorb the latest and purest elements of the Italian style then being developed by such composers as Alessandro Scarlatti and Francesco Gasparini. By the end of 1707 his first Italian opera, Rodrigo, had been staged in Florence, showing that he had served his apprenticeship well; and with Agrippina, first performed in Venice at the end of 1709, his complete mastery of the style was apparent. Audiences greeted the new work with cries of ‘Viva il caro Sassone!’ (‘Long live the dear Saxon!’) and (thanks to the many foreign visitors who took in Venice while making the Grand Tour) Handel immediately gained international fame.

Many opportunities were open to him, but Handel chose to come to England. A taste for Italian opera had just begun to develop in London, at first rather haphazardly through pasticcios (made up of arias from various sources) and a version of Giovanni Bononcini’s Camilla prepared by Nicola Haym, all sung in English. The arrival of Italian singers (particularly such castratos as Valentino Urbani and Nicolini) forced a move to the Italian language (not without much vituperative critical comment) and prepared the way for Handel’s arrival. His Rinaldo was the first Italian opera actually composed in Britain, and its triumphant production in 1711 effectively consolidated the dominance of Italian opera on the London stage.

Operas in London in the 1710s were still produced on an ad hoc basis under the system of theatre management then current for spoken drama, but in 1719 a group of noblemen formed the Royal Academy of Music, an organization dedicated to the production of Italian opera of a quality to rival the best houses of Europe. That meant, above all, obtaining the very best singers. For a while the Academy succeeded. Handel acted as ‘Master of the Orchestra’ and other composers were also engaged, notably Bononcini (whose style had advanced considerably since he had composed Camilla in 1696) and Attilio Ariosti; but the greatest of the Academy’s productions were the three operas composed by Handel in 1724 and 1725: Giulio Cesare in Egitto, Tamerlano, and Rodelinda. The singers of this period included the leading sopranos Margherita Durastanti, Francesca Cuzzoni and Faustina Bordoni, and the castratos Francesco Bernardi (known as ‘Senesino’) and Gaetano Berenstadt. They were highly gifted and consequently commanded extremely high salaries – a major factor contributing to the financial collapse of the Academy in 1728.

Handel and the impresario J J Heidegger took over the Academy’s assets and began producing operas on their own account, with support from the new King, George II. This annoyed several of the Academy’s previous supporters, and (further stimulated by political motives) they formed a new opera company (the ‘Opera of the Nobility’) to rival Handel’s. Nicola Porpora was its musical director and in its second season the greatest of the castratos, Farinelli, joined the company as its star performer. Handel was temporarily exiled from the main opera house, the King’s Theatre in the Haymarket, but found another home in John Rich’s newly built theatre in Covent Garden. There he produced his finest operas of the 1730s, Ariodante and Alcina. By this time a new musical form – English oratorio – was engaging the interest of Handel and his supporters, but opinions were mixed and he persisted with Italian opera. The Nobility Opera finished after only four seasons and Handel returned to the King’s Theatre, but his latest operas never quite regained the inspiration of former years. Only the amusing and yet affecting Serse seemed to point fruitfully in a new direction (partly because it looked back to an earlier and more flexible Venetian tradition) but it was not a success. Handel’s last opera season of 1740/1 petered out ignominiously after just three performances of his last opera, Deidamia. He went to Dublin in the autumn of 1741 to give a highly acclaimed season of oratorios and other choral works, including the first performance of Messiah, and returned with a determination to abandon Italian opera. He soon found that he could confine his activities to short yet highly profitable oratorio seasons, and he kept to that formula for the rest of his life.

Handel’s operas thus became outmoded in his own lifetime and were virtually forgotten for two hundred years, though their scores were dutifully published in the collected edition of his works prepared by Friedrich Chrysander between 1858 and 1902. The first attempts at reviving them on the stage were made at Göttingen in the 1920s by Oskar Hagen, but in versions freely arranged to reflect the operatic taste of the time. In the 1950s revivals continued at Göttingen and Halle, where at first they remained influenced by Hagen’s ideas, while fresh and partly amateur approaches in Britain led to stage performances which kept closer to the scores as Handel actually wrote them, especially in avoiding the use of bass voices to sing the high-voice heroic male roles originally written for castratos (and sometimes for women). With the impetus of the early music movement in the 1970s the old ways soon vanished. The best of Handel’s operas are now in the repertories of opera houses all over the world, and many modern directors – often controversially – have found their combination of artificial form and emotional truth well suited to productions influenced by abstract ideas: philosophical, psychological or political.

The era of ‘the rival queens’
On the disc Hyperion CDA66860 Emma Kirkby and The Brandenburg Consort presented items from the first half of Handel’s operatic career, from Almira (1704) to Scipione (1726). The present selection, again made by Roy Goodman and Emma Kirkby, draws on the operas composed by Handel for the last three seasons of the Royal Academy of Music (1726–1728), all originally sung by the two sopranos Francesca Cuzzoni and Faustina Bordoni. Cuzzoni’s roles are sung by Catherine Bott, Faustina’s by Emma Kirkby. Cuzzoni had made her debut in London in 1723. Faustina was engaged for the 1725/6 season, but her delayed arrival in London prevented her from appearing until the first performance of Handel’s Alessandro in May 1726, when most of the season was over. The fact that the two singers first appeared together playing rival lovers of Alexander the Great immediately ensured they were dubbed ‘The Rival Queens’, the title of an antiquated and much parodied tragedy by Nathaniel Lee, first performed in 1677 and still in repertory in the 1720s. (Like Alessandro it tells of two women vying for the love of Alexander, though the story is quite different. The play, unlike the opera, is set in the last days before Alexander’s death, and Roxana’s rival is Alexander’s first wife Statira, not the entirely fictional Lisaura of the opera.)

The choice of the libretto for the debut of Faustina leaves little doubt that the Academy’s directors were intent on exploiting the likely rivalry of the two singers, and the immediate success of Alessandro at first vindicated their decision. There were, however, dissenting voices, notably that of the agent Owen Swiney, who had helped arrange Faustina’s contract. Writing from Venice just when Faustina was arriving in England, he urged the Duke of Richmond, one of the Academy’s directors, ‘never to consent to any thing that can put the Academy into disorder, as it must, certainly, if what I hear … is put in Execution: I mean the opera of Alexander the great; where there is to be a Struggle between the Rival Queen’s, for a Superiority’. Swiney’s warning was ignored, but nevertheless proved prophetic. Satirical attacks on the expense and supposedly degenerate nature of Italian opera increased, and the next season, the first in which Cuzzoni and Faustina appeared throughout, ended in scandal with a performance of Bononcini’s Astianatte at which factions of the audience supporting the rival singers behaved riotously in the presence of one of the royal princesses. Swiney’s prediction of ‘disorder’ had come true. The next season opened in a mood of pessimism. Dissent among the directors and the lowered reputation of the opera militated against efforts to recover the Academy’s growing debts, and the season turned out to be the last under the Academy’s regime. The success of John Gay’s The Beggar’s Opera, first produced on 29 January 1728, did not itself bring about the demise of the Academy’s activities but added an extra degree of hostile ridicule. Italian opera by no means vanished from the London stage, however. When an attempt to raise a subscription for the 1728/9 season failed, the Academy’s directors released the company’s assets to Handel and Heidegger, and opera resumed under the new management in December 1729.

Neither singer worked with Handel again. (The librettist Paolo Rolli implied that Handel never liked Faustina and grew tired of Cuzzoni.) Faustina married the composer Johann Adolf Hasse and had a successful career in continental Europe for the next twenty years. Cuzzoni, a less stable character with a tendency to financial extravagance, never regained her popularity. She sang in London again for the Opera of the Nobility from 1734 to 1736, but made little impression. In 1750, ‘old, poor, and almost deprived of voice’ (according to Charles Burney), she returned for the last time, singing benefit concerts to clear her debts, but with little success. She finally retired to Bologna where she died in poverty.