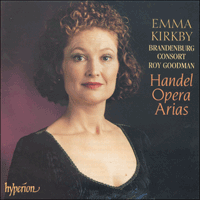 The greater part of Handel's working life as a composer was devoted to writing and performing operas. In many ways this was the genre to which he owed his international renown: performances during his period of study in Venice won him an audience far greater than could be expected in London. Italian opera reached England around 1710, and the staging of Rinaldo in 1711 confirmed Italian as the language of the future for such ventures.

This exciting recording from Emma Kirkby presents nine arias, from nine of the most enduring of Handel's Italian operas, alongside four overtures.