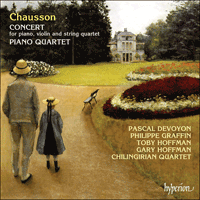 'Never have I had such a success! I can't get over it. Everyone seems to love the Concert.'

So wrote Chausson in his diary after the first performance of his Concert in D major (1892); the Brussels audience present at this event had won him his first real triumph. The work is a model of cohesion, with strong ideas and melodies of great impact. The autograph manuscript is covered with alterations and crossings-out, signs of the composer's drive towards absolute perfection in this masterpiece of chamber music.

The Piano Quartet was written in 1897 and once again its premiere saw the audience, this time in Paris, moved by the infectious vitality and undeniable force of the music. Had Chausson not died falling off his bike eighteen months later his chamber music output would no doubt have included many more such works and won the recognition which these two works show it to deserve.

‘It is difficult not to succumb to what has been aptly called Chausson's 'refined and voluptuous melancholy', to a richness and complexity that can engulf the senses’ (Gramophone)
‘These accounts traverse the gamut of emotions, bristling with energy, lyricism and conviction, and ensuring that this disc will never gather much dust’ (BBC Music Magazine)
‘An exemplary recording of one of his finest works’ (The Times)
‘The listener is left entirely free to revel in Chausson's sensualistic palette of scented harmonies and timbres. A revelation – certainly one of my top releases for 1997’ (Classic CD)
‘This really is very fine … the sense of teamwork is quite exceptional and the resulting music-making radiates an inspiring eloquence … a release no true Francophile can afford to miss’ (Hi-Fi News)
‘This release counts as desert-island material’ (Soundscapes, Australia)
«Un fort bon disque qui confirme les excellents choix artistiques d'Hyperion dans le répertoire française» (Répertoire, France)

’Never have I had such a success! I can’t get over it. Everyone seems to love the Concert. Very well played, with wonderful moments, and so artistically executed! I feel light and joyful, something I haven’t been for a long time. It’s done me good and has given me courage. I believe I’ll work with more confidence in the future.’

This is Chausson’s entry in his diary (as yet unpublished) for 26 February 1892. Each phrase is telling; the reception which the audience in Brussels had given his opus 21 had made him ‘feel light and joyful’ and had given him ‘courage’ to continue with his work. As we all know, a sense of well-being can be very uplifting. Reading this diary, one can sense his enthusiasm and his desire to create. But this real triumph, which his modesty prevented him from broadcasting, was his first. Although he was already thirty-seven, with a sizeable catalogue of works to his name, he was practically unknown. Why?

First, he was not a ‘product of the Conservatoire’. Born in Paris on 20 January 1855 into a well-off family (his father was a public works contractor), he was sworn in as a barrister on 7 May 1877 to please his parents, who wanted him to have a ‘proper job’. But at around the same time he also composed his first mélodie, Les Lilas, and asked for private lessons with Massenet. The latter, recognizing the young man’s obvious flair, soon took him in to his class at the Conservatoire—as Franck was to do shortly afterwards—and encouraged him to enter for the Prix de Rome. It was his lack of success on this occasion (13 May 1881) which brought about a change in him, both psychologically and musically; the result was his wonderful Trio in G minor, Op 3, composed during the summer at Montbovon in Switzerland. During the same period Chausson also composed seven others works which went unnoticed: the Mélodies comprising his opus 2.

Having graduated from law school (like so many of Franck’s pupils!), having failed to follow the usual route of studying at the Conservatoire, and, additionally, having come late to music—after all, he was over twenty years old (which, not surprisingly, imbued his writing with a rare maturity)—Chausson appeared to be out on his own, neither bohemian (like Verlaine) nor conventional like so many others, writing more for his own amusement than for that of the public, and earning himself a reputation for being ‘difficult’ and the ‘Mallarmé of music’!

But there is undoubtedly another much more subtle reason why his compositions were so little-known: although not as well-off as has often been presumed, he was reasonably comfortable and thus shielded from financial insecurity. In fact his diary and letters, whether from friends or business acquaintances, reveal that he was constantly being asked to help out discreetly various impecunious colleagues, or (and one can quite see why!) to become Treasurer of the renowned National Society of Music. Add to these his abhorrence of being taken for an amateur, with his lofty artistic and spirtual aims—‘I understand only that work, constant effort in all things, is always directed towards the same goal’ (letter to Paul Poujaud in the summer of 1888)—and, in an earlier diary, his entry for 20 February 1892: ‘To attain self-belief is a life’s work.’ Given all this, one can understand exactly how triumphant he felt when, for once, a new composition received unanimous praise. The audience had been captivated by the exceptional quality of the writing and the strength of the ideas, the work’s remarkable construction and development, and its instantly memorable tunes.

They were equally impressed by the tautness of the score, possibly due to the fact that it had been written quickly. It is often thought that the four movements of the opus 21 were written in the following order: third movement, May 1889, second movement, October/November 1890, first movement, June 1891 and fourth movement, July 1891. The reality is very different, because the sketches prove conclusively that all the themes were written within the month of May 1889, which explains the work’s perfect cohesion. The crossings out, changes and erasures are merely the hallmarks of the composer’s endless quest for absolute perfection.

The result is superb. From the first bars of the Décidé, the rhythm is established by the first three repeated chords. At bar 35 the first motif is introduced on the violin over a piano appoggiatura: this is the motif which links each movement. After a section of tortured self-doubt, the second theme enters in B flat minor. The development unfolds in the classical style, giving prominence to the first theme, with the emphasis in the repeat being very much on the second. After this bitter confession the Sicilienne appears rather like a rainbow embracing a stormy sky: the colours are unreal, curving elegantly in their crystalline iridescence, dispelling the most vivid anxieties. The following Grave remains one of the most beautiful slow movements ever written, sombre, tragic, developing in a stark, chromatic line. However, the last movement leaves us in no doubt: a triumph of head over heart, swept in by a very animated 6/8 theme pulsating with energy. The second subject, given to the piano, leads back to the clear tonality of D major while simultaneously returning to the principal elements already heard in the preceding pages. The pace broadens and it is in the luminous key of D major that the Concert ends. Chausson has come full circle, with his hopes and doubts, his disenchantments and his most lyrical aspirations intact.

Some years later, in the period between July and September 1897, Chausson was to return to chamber music to compose his Piano Quartet in A major, Op 30, dedicated to Auguste Pierret, who had courageously assured the success of the earlier Concert by standing in, at virtually no notice, for the pianist Litta.

The opening Animé in 2/2 develops into three themes: the first, given to the piano, establishes the key of A major; the second sings on the viola above keyboard sextuplets; and finally the third, plus lent, spreads its lilting rhythm over the right hand of the piano, preceded by a brief reminder of all that has gone before. The development then appears as a kind of perpetual modulation essentially based on the first theme, remaining harmonically in A major throughout, thus allowing numerous rhythmical and tonal combinations, notably C, F sharp, B and E flat. The other two themes are interwoven to add drama and heighten the contrasts and appear in the passages where psychological or musical tensions have crept in. Finally, at the end of the movement, the second subject undergoes several metamorphoses before modulating to A with the recapitulation of the first theme.

The following Très calme, also in ternary form, gives the viola, over long, gentle chords on the piano, a beautiful theme in D flat major. This is followed by a different theme in F, which sheds light on the debate. A radiant calm emanates from this gloriously poetic tune and makes this movement one of Chausson’s greatest achievements.

The Simple et sans hâte, which takes the place of a scherzo, prolongs this mood, the second motif seemingly emerging from the first, with a true elegance accentuated now and again by pizzicati or skilful modulations which give it light and shade.

At first disturbed, the final Animé becomes alert and lively. After a brief introduction, all the themes come into play: the piano provides strong rhythmic accompaniment and, after a brief reminder of the opening subject, a second theme appears, alternating between D flat and C minor. Throughout the development Chausson, true to the cyclical form so beloved of his teacher César Franck, reintroduces the work’s main themes, notably the first and third which dominate, while the tenderness of the fourth softens the impact for a few moments. The finale, however, is unambiguous, leaving the final word to the first subject which resolves in a dazzling A major. The Quartet has an infectious vitality and undeniable force which was fully appreciated when the work was premiered on 2 April 1898 at the National Society of Music by Pierret, Parent, Denoyer and Baretti.

Chausson would no doubt have persevered for a long time had he been judged on his later works, but he had barely eighteen months to live. On 10 June 1899 the life of this great and noble artist was cut short by a fatal cycling accident.