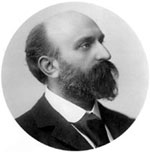 born: 20 January 1855
died: 10 June 1899
country: France
Ernest Chausson (1855–1899) came late to music, after completing his initial studies in law and qualifying as a barrister. He studied with Massenet at the Paris Conservatoire. Despite his early interest in Wagner—even spending his honeymoon in Bayreuth—Chausson became a fervent member of the Franck circle. In common with many contemporary French composers, he sought to free French music from Wagnerian influence by turning to the baroque, particularly to the music of Couperin and Rameau. Although Chausson died prematurely, in a cycling accident at the age of only forty-four, he left a significant body of music spanning many different genres.