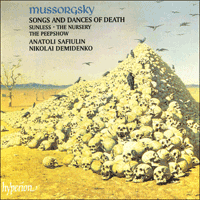 This disc contains the four song cycles by Mussorgsky, including the famous Songs and Dances of Death which is widely recognized as being one of the masterpieces of the genre. The dramatic intensity which Mussorgsky achieves in this set finds similar expression in The Nursery despite the apparently divergent subject matter. These latter texts, inspired by conversations with the children of a family friend, see Mussorgsky composing with equal commitment and uncannily perceptive analysis of childhood. Sunless sees a return to the atmosphere of the Songs and Dances of Death. His senses dulled by drink and the incessant tedium of his office job, Mussorgsky here composes with a grinding pessimism quite uncharacteristic of the rest of his work. Russian bass Anatoli Safiulin is acclaimed as a champion of Russian Music for his interpretations of Mussorgsky, Prokofiev, Rachmaninov, Rimsky-Korsakov and Shostakovich. On this recording he is joined by the renowned pianist Nikolai Demidenko, whose exclusive recordings for Hyperion of works by Chopin, Scriabin, Tchaikovsky, Weber and others have met with universal praise.