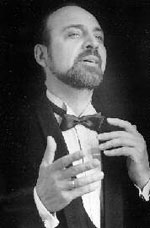 The Russian bass Anatoli Safiulin is acclaimed as 'a champion of Russian music' for his interpretations of Mussorgsky, Prokofiev, Rachmaninov, Rimsky-Korsakov and Shostakovich, and he has given the premieres of works by many distinguished contemporary Russian composers including Edison Denisov, Sophia Gubaidulina and Alfred Schnittke. His wide-ranging repertoire also encompasses music by Bach, Bartók, Brahms, Mahler, Massenet, Mozart, Schoenberg, Schubert and Verdi.

Anatoli Safiulin regularly sings at international music festivals and has worked with such eminent conductors as Nikolai Fedoseyev, Mariss Jansons, Alexander Lazarev, Kurt Masur and Krysztof Penderecki. Among his recordings, his versions of Shostakovich's Symphonies Nos 13 and 14 have won especially favorable reviews from the British press.

His complete recording of the Mussorgsky song cycles, accompanied by his friend and compatriot Nikolai Demidenko, is his first for Hyperion. Mr Safiulin lives in Moscow.