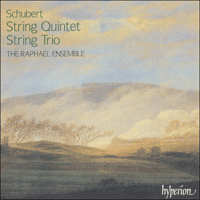 Having spent the summer completing the Fantasia in F minor for piano duet (D940) and the Mass in E flat (D950), on 1 September 1828 the ailing Schubert moved to his brother’s apartments (‘Auf der Wieden’) in the Viennese suburbs in order to breathe the ‘better air’ of the surrounding countryside. However, the house had only recently been erected and the resulting dampness did little to improve the composer’s constant syphilitic fits of giddiness. As he had left most of his belongings and manuscripts with his close friend Schober, it is generally assumed that the composer had originally intended only a short stay, but in the event it was to become his last residence.

Most of September was spent working on the last three piano sonatas (D958, D959, D960), and in early October Schubert contacted his publisher, Probst, announcing their imminent completion, alongside the String Quintet and some Heine and Rellstab song settings (later to become the song collection Schwanengesang). On 26 October, shortly before fatally contracting typhoid fever, Schubert signed the manuscripts of the Sonatas, and within the month (19 November) had passed away. Perhaps most poignantly of all, he had visited the music theorist Simon Sechter only two weeks before his death ‘in order to study counterpoint and fugue, because he understood that there he needed some assistance’.

These final works appear not to have been written to order but rather because of some inner compulsion to set down his last thoughts before time ran out—he was only thirty-one years of age when he died. The only mention of the Quintet in his correspondence is found in a letter dated 2 October in which he mentions having ‘finally turned out’ the work before going on a walking tour with some friends; there is record neither in his friend Bauernfeld’s diaries nor in any contemporary musical literature. The original manuscript has since disappeared. Although Schubert’s immediate inspiration for the work is uncertain, it is known that during this time he took part (as violist) in a private performance of Beethoven’s late C sharp minor Quartet Op 131 which, according to an acquaintance, sent him ‘into such transports of delight and enthusiasm that all feared for him’. It is possible that he therefore felt some subconscious desire to emulate his composer-hero, who had himself died the previous year, by bowing out with a large-scale chamber music masterpiece.

Interestingly, in composing his Quintet Schubert chose not to use the double viola ensemble favoured by Beethoven and perhaps most notably Mozart before him, but to add an extra cello to the normal string quartet configuration (two violins, viola, cello). This gave Schubert the benefit of an added bass instrument, allowing him greater freedom to explore the lyrical potential of the cello as well as providing him with potentially richer middle register textures, as in the Adagio where the main theme is played by the second violin, viola and first cello. To encompass the vast emotional range unleashed in this summation of a cruelly short creative life, Schubert expanded the time-scale of the Quintet to an unprecedented length—almost an hour when all the marked repeats are taken.

Only ten days after Schubert’s death a vast quantity of his unpublished manuscripts were sold as a job lot to Diabelli & Co, and it verges on the unbelievable that the publication of one of the greatest of all chamber music compositions was delayed until 1853 (parts only) when it was designated ‘Op 163’. The first ever public performance (as far as this can be ascertained) was given as part of a string quartet recital on 17 November 1850 by an ensemble led by Georg Hellmesberger. Despite such inauspicious beginnings the String Quintet rapidly established itself, its heady combination of spacious lyricism and rigorous structural control exerting a profound influence. Many musicians have spoken in awe of its spiritual Elysianism, including the pianist Artur Rubinstein (who requested the slow movement be played at his funeral), the great nineteenth-century cellist Alfredo Piatti (who asked for it be played during his dying hours to send him into the next world), and the renowned quartet-leader John Saunders, who had the opening seven bars of the first movement’s second subject inscribed on his tombstone.

The long-breathed opening bars of the Allegro ma non troppo create the impression of being a slow introduction, an ingenious device achieved by the use of long note values within a basically fast tempo (the opening C major chord consists of two tied semibreves). This temporal effect is further enhanced when the first violin dramatically launches into a series of staccato arpeggio figurations whose rate of harmonic change is identical to that of the opening, yet which at a surface level suggest a greater sense of imperativeness and forward momentum. A triplet figure first heard in this context soon dominates the proceedings, driving the music inexorably onwards towards a cadence which apparently resolves in the expected dominant for the second subject (G major). Yet by a miraculous harmonic sleight of hand Schubert moves us within two bars into the key of E flat as though it were the most natural thing in the world—an inspired preparation for one of the most cherished melodies in all music, a duet sounded first in the cellos, then the violins, and subsequently further ruminated upon by the first violin and viola.

The exposition is rounded off by a new march-like idea which saturates in various forms the following development section. At this point the 154-bar exposition is repeated in its entirety. There is no first or second time bar—the closing dominant (G) seventh chord leads back quite naturally to the opening, yet when this point is reached for the second time, Schubert slips in another two-bar harmonic surprise to lift the music magically into A major. The extended and emotionally intensified development section culminates in the driving triplet rhythms first heard as a bridge between the first and second subjects and, following a radiantly seamless overlap with the return of the opening material, there ensues a recapitulation which retains the essential outlines of its exposition counterpart. The final coda acts as a secondary, microcosmic development section, closing with one final fond look back to the apparently innocent material which had initially spurred this magnificent creation into being.

The String Quintet exemplifies Schubert’s love of the interval of the third, both in terms of localized harmonic movement and of long-term tonal relationships. The Adagio exemplifies this tendency, being cast in E major (a major third away from the work’s overall tonal centre) and opening with a meditative theme ostensibly in thirds (second violin and viola). The sense of timelessness unmistakably recalls the work’s opening bars, and the first violin’s decorative comments enliven textural interest in a way already familiar from the first movement’s second subject. This is music which superficially creates an impression of perfect calm and stillness, yet there is an underlying tension (due in no small part to the first violin’s pensive commentary) which finally erupts (signalled by an E unison trill) in the F minor middle section. Here the driving triplet rhythms encountered earlier in the work are transformed into malevolently sinister outbursts of dark foreboding as the music tears away as if in the throes of some tormented mental anguish constantly articulated by thrusting syncopated rhythms. The return to the opening material is accomplished with compelling mastery: the F minor section appears to exhaust itself before finally collapsing as the familiar strains re-emerge, this time with vastly more elaborate first violin and second cello lines decorating above and below. For all their apparent repose, the closing bars suggest a feeling of quiet resignation rather than resolution.

Set immediately against the contemplative introspection of the slow movement, the rip-roaring peasant dance of a Scherzo which follows is all the more breathtaking in its primeval physical force. Indeed, in terms of its unquenchable propulsion and unbridled joy in hyperactive textures, this movement caps anything comparable in his entire output. Schubert’s elation is relatively short-lived, however, as a striking move up a semitone into D flat heralds the start of the central Andante sostenuto, whose tortured innocence painfully suggests the composer’s increasing awareness of his own mortality (he died just a matter of weeks after completing the Quintet). A short bridge passage, which would appear to have influenced the identical structural point in Schumann’s Piano Quintet, leads straight back to a repeat of the boisterous Scherzo.

The enhanced physicality of the Scherzo spills over into the sonata-rondo Allegretto finale with its increased tendency towards muscular, pseudo-orchestral textures. There is some evidence to suggest that the opening C minor theme may have been derived from a Hungarian dance melody, although no one could mistake the typically Viennese lilt of the heart-warming second subject announced by the first violin and first cello. Just as in the first movement, Schubert’s delight in triplet figurations is well to the fore, first as an accompanying figure in the viola and then quickly transformed into dancing, decorative arabesques over the second violin’s extension of the theme. The final section finds Schubert at his most exuberant, driving the music home in an almost Tchaikovskian manner with a Più allegro propelling the final statement of the opening theme towards a breathtaking Più presto coda.

Although the String Quintet is arguably Schubert’s finest chamber work, it hardly detracts from his other wide and varied achievements within the same sphere, including two full-scale piano trios, the celebrated Octet and ‘Trout’ Piano Quintet, some fifteen string quartets, and a substantial quantity of music for piano-accompanied instruments and piano duet. A number of otherwise notable works were left incomplete by Schubert (the most famous example being the ‘Unfinished’ Symphony), including the so-called ‘Quartettsatz’ in C minor, D703, and the work included on this recording, the String Trio in B flat, D471, of which only the first movement was completed (the first thirty-nine bars of a planned Andante sostenuto second movement have also survived).

During the autumn of 1816, Schubert had finally quitted his much-loathed teaching post and moved in with his close friend Franz Schober. Away from his overcrowded and repressive family home, sharing accommodation with a charismatic young man whose experience of life was far wider than his own, and in a vastly improved frame of mind, Schubert began to pour forth new compositions, including the present String Trio during the September. Although compared to the vast musical canvas of the String Quintet, the Trio (as it exists) represents a veritable microcosm of musical activity, the tendency towards relatively untroubled, often highly lyrical exposition/recapitulations, dramatically heightened by a more serious central development section, is already unmistakable. This miniature gem is one of the most treasured works in the string repertoire.

It would be nearly a century before the full scope of Schubert’s genius would come to be appreciated, a fact which was not lost on the great writer George Eliot, who reflected with typical perspicacity: