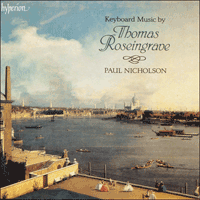 Thomas Roseingrave was born in 1688, the son of the Irish composer Daniel Roseingrave, currently organist of Winchester cathedral. He was presumably taught music by his father and in 1707 entered Trinity College, Dublin. He failed to complete his studies there, for in 1709 he was sent to Italy 'to Improve himselfe in the art of Musick' by the authorities of St Patrick's Cathedral in Dublin. In Venice Roseingrave met Domenico Scarlatti, whose music and style of harpsichord playing became a lifelong influence. According to Charles Burney, who knew him later ln life, when Roseingrave heard Scarlatti play he thought 'ten hundred d—ls had been at the instrument' and said that he 'never had heard such passages of execution and effect before'; he 'did not touch an instrument himself for a month' afterwards. Burney added that Roseingrave 'became very intimate with the young Scarlatti, followed him to Rome and Naples, and hardly ever quitted him while he remained in Italy.'

The main outcome of Roseingrave's years in Italy was his earliest dateable composition, the Italianate verse anthem Arise, shine, for thy light is come, written in Venice in December 1712 to celebrate the Peace of Utrecht. Its composer seems to have returned to Ireland soon after, for the work was performed on 9 June 1713 during the official thanksgiving service at Christ Church Cathedral, Dublin. Not much is known about his movements over the next few years, but he was presumably in London by June 1717 when a 'serenade' of his was performed at York Buildings. He rapidly established himself in London's flourishing musical life, and in 1720 assisted Domenico Scarlatti with the production of his opera Narcisco. In 1725 he became organist of St George's, Hanover Square, after a competition reputedly judged by J C Pepusch, J E Galllard and Maurice Greene; Handel, a parishioner, sent a fugue subject, and Burney wrote that Thomas Arne and Michael Christian Festing, who were present, 'spoke with wonder of Roseingrave as an extempore fughist; but confirmed the general censure of his crude harmony and extravagant modulation, which, indeed, his printed compositions imply.'

Roseingrave's later years were clouded by madness. According to Burney, a few years later he 'fixed his affections on a lady of no dove-like constancy', and on being rejected fell into 'a temporary and whimsical insanity'; in 1744 he was forced to relinquish his post at St George's and lived for a number of years in Hampstead where Burney often visited him, charmed by his 'sweetness of temper and willingness to instruct young persons' as well as his entertaining and instructive' conversation. He returned to Dublin around 1750, where he lived with his nephew William, and his last major work, the opera Phaedra and Hippolitus, was performed there in 1753. He died on 23 June 1766 and was buried in the family grave at St Patrick's Cathedral where the inscription described him as 'a most celebrated musicilan and accomplished man'.

Roseingrave wrote a fair amount of vocal music — there are some English songs and a set of Italian cantatas, published in 1735 — but he is mainly remembered for his keyboard music. His first set of organ music, published by John Walsh in 1728, was evidently a success. Walsh reprinted it in 1731, and Daniel Wright issued a new edition in 1734 — apparently without the composer's consent, for the mistakes of the 1728 edition were not corrected. It consists of a sequence of 'voluntaries' and fugues, but there is little sign that Roseingrave intended them to be grouped as pairs like the German prelude and fugue. The distinction between the two types is not always clear; No 7, for instance, is called a voluntary, though it is as fugal as any in the collection. The familiar two-movement form of the English voluntary was only established later with the works of John Reading, Maurice Greene and John Stanley.

Roseingrave's style of playing the organ (and composing for it) was received with mixed feelings by his contemporaries. Sir John Hawkins admitted that he was a 'profoundly skilled' teacher, but thought his style of playing and composing 'harsh and disgusting, manifesting great learning, but void of elegance and variety.' To Burney the harmony in his voluntaries, was 'rendered intolerably harsh and ungrateful by a licentious and extravagant modulation, and a more frequent use of the sharp third and flat sixth, than any composer with whose works I am at all acquainted, not excepting Dr Blow.' Mention of Blow, Burney's bête noir, is significant in this context. Roseingrave's harmonic style, presumably learned from his father, was partly late seventeenth-century in character, with unpredictable modulations and biting dissonances — including, as Burney pointed out, chords with a major third and a minor sixth, a favourite expressive device of Restoration composers. Furthermore, his fugues are complex and densely argued, and often require a virtuoso technique. No wonder they seemed 'harsh and disgusting' to a generation accustomed to the bland sequences and vapid two-part writing of mid-century voluntaries. Roseingrave's set of six double fugues, published in 1750, are more conventional works, clearly indebted to Handel's famous set of Six Fugues or Voluntarys, published ln 1735. No 4 would certainly have reminded players of a favourite Handelian idea, best-known from the Chandos anthem As pants the hart and the chorus 'These pleasures, Melancholy, give' from L'Allegro ed il Penseroso.

Roseingrave's set of Eight Suits of Lessons for the Harpsicord or Spinnet was issued by Walsh in 1728, and again in about 1730. It belongs to a venerable tradition that goes back by way of Wllliam Croft, Jeremiah Clarke, Henry Purcell and Matthew Locke to mid-seventeenth-century English keyboard imitations of French lute music. More recently, Handel had brought new life to the genre with the publication of his Suites de pièces pour le clavecin (London, 1720), which drew the attention of English composers to a number of idioms of the harpsichord suite in his native Germany. Roseingrave's richly-wrought allemandes and courantes, with their broken textures and discursive, exploratory harmonies, are throughly English, but his fugal moto perpetuo gigues are clearly derived from Handel, as is the Saraband of Suite No 7 with its echoes of 'Lascia ch'io pianga' from Rinaldo (1711). The same could be said of the Overture of Suite No l; German composers brought the French overture, hitherto an orchestral form, into harpsichord music around 1700, and Handel wrote a number of splendid examples, including the one that opens Suite No 7 of the 1720 collection. Incidentally, the helter-skelter Presto of Roseingrave's E flat suite is just about the only movement in the collection that reflects the influence of Domenico Scarlatti.

The Concerto in D is a puzzle. It survives in two sources: a manuscript in Cambridge and an undated print, A Celebrated Concerto for the Harpsicord, published after the composer's death (it is credited to 'the late Tho. Rosengrave'). The two sources differ in many respects, but the manuscript version is longer, fuller and generally more accurate, and has been chosen for this recording. It is not easy to decide whether the work is an imitation of an orchestral piece, like Bach's 'Italian Concerto', or an actual keyboard reduction of a lost orchestral piece, and, if so, what form the original might have taken. A clue is the unmistakable writing for two trumpets in the last movement, for there are newspaper references to an 'Organ Concerto with Trumpets and Kettle-drums by Tho. Roseingrave' given in Dublin on 8 March 1750 with Handel's Alexander's Feast. Thus the work may have started life as an organ concerto, with an orchestral accompaniment including two trumpets and timpani. Its simple style and primitive structure suggests that it was in existence well before 1750; it may be the earliest keyboard concerto by an English (or British) composer.

The instruments used on this recording are typical of those that Roseingrave would have known. The organ is by Martin Goetze and Dominic Gwynn. It has four stops, 8', 4', 2' and mixture, and is based on surviving English chamber organs of the early eighteenth century. The harpsichord is by John and Abraham Kirckman (London, 1778), and is an example of the large and powerful type of instrument that was more or less standard in England from about 1740 to 1790. It has a single keyboard, with three rows of strings, two at 8' and one at 4'. Transcriptions of the organ pieces and the Concerto in D were kindly provided by Richard Platt; they are taken from his projected complete edition of Roseingrave's keyboard music.