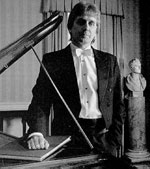 A native of Liverpool, Paul initially studied harpsichord and organ at Dartington College of Arts before reading music at the University of York. His tutors included John Wellingham, Roy Truby, Nicholas Danby and Colin Tilney. He is now a regular broadcaster on BBC Radio 3 and, as a Hyperion artist, his work has involved guest appearances as director and soloist with The Parley of Instruments in music by Arne, Linley and other English composers, as well as solo keyboard recordings of music by Handel, Philips and Roseingrave.