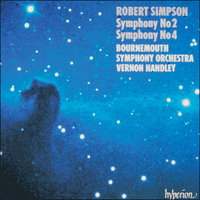 All of the music on this album is also available as part of the specially priced box set The Complete Symphonies of Robert Simpson: ‘One of the outstanding recording projects of our time … this Hyperion series deserves to stand as a monument while other more superficially glamorous ventures rise and fall around it. If it does not do so, and if it does not eventually force Simpson’s breakthrough into the orchestral repertoire, there will truly be no justice’ (Gramophone).

‘Exemplary performances in superb sound’ (BBC Music Magazine Top 1000 CDs Guide)
‘Full of wonderful orchestral effects which this purist, beautifully laid back and believable recording seems merely to mirror without any signs of compression or clouding … I rejoice to hear them so finely played and beautifully recorded’ (Gramophone)
‘A stunning coupling … I can't think of a better introduction to Simpson’ (The Independent)

(Symphony No 2)
Simpson's Symphony No 2, completed in 1956, remains the most frequently played of all the composer's orchestral works. It is dedicated to Anthony Bernard, the conductor of the London Chamber Orchestra, and his wife Mary. Like two of Simpson's later Symphonies, No 7 (1977) and No 11 (1990), the Second is scored for a standard classical orchestra — the same forces, in fact, that Beethoven chose for his first two symphonies: double wood wind, pairs of horns and trumpets, timpani and strings. The composer has stipulated that high D trumpets must be used rather than the more customary B flat instruments. Like the First Symphony (1951), No 2 is in three movements, adopting a fast-slow-fast pattern, though here the movements are played separately. As with Simpson's first three string quartets which immediately preceded it, the Second Symphony shows a profoundly original treatment of 'progressive' or 'emergent' tonality whereby the music is driven forward by two or more conflicting keys. Here the tonal centre is B with a strong pull towards the two keys a major third above and below, E flat and G.

The 'Allegro grazioso' begins and ends in B, with two big climaxes in E flat and G respectively. It adopts a gently swinging, fast triple-time pulse that suggests a faint reminiscence of Nielsen, one of Simpson's lifelong idols. The movement begins quietly, but with a great sense of latent energy as the music naturally evolves from the initial motif heard at the outset on violins and violas.

Placed on either side of the two climaxes are two fugatos: the first for strings alone is strong, determined, whereas the second, begun by the woodwind, skips along with much mischief and jollity. After the second climax has subsided, the opening theme returns at a slower tempo, gradually fading away into silence as the first bar of the Symphony is repeated several times.

The slow movement is placed second and is cast as a theme with thirteen variations on a gravely beautiful unharmonised viola melody which revolves gently from E flat to G. In fact, with the exception of the last five bars, the movement is strictly palindromic, so that the oscillation between keys is reversed half way through. The middle variations, which are all pianissimo, seem to provide a 'still centre' to the whole Symphony and perhaps evoke the immensities of a nocturnal, star-lit sky.

The Finale returns to the original key of B. It is a strong, stamping movement with a tigerish energy and rhythmic drive similar in spirit to the last movement of Beethoven's Seventh Symphony which is acknowledged as an important influence. As with the Beethoven, it is astonishing to hear how Simpson can make this Finale roar whilst still employing an orchestra of relatively modest proportions. The overall structure mirrors that of the opening Allegro, with the first climax in E flat and the recapitulation grafted on to the second climax in G. An extended coda is needed to restore the key of B with the greatest force. When this is achieved the movement ends abruptly with considerable vigour.

(Symphony No 4)
The Fourth Symphony was completed in 1972 when Robert Simpson was fifty-one. With a duration of over forty minutes it was his largest work to date in terms of scale, archictecture and sheer boldness of symphonic invention. Since the first performance, which was conducted by James Loughran with the Hall‚ Orchestra, the composer has revised the slow movement by quickening the pulse from Adagio to Andante, altering the contours of the cello solo near the beginning, and directing the final climax to be hushed. There are additional smaller revisions also, mainly concerning instrumentation and balance.

Simpson's No 4 is a classical E flat Symphony, so much so that the Scherzo and slow movement are in the dominant and subdominant keys respectively, whilst the outer movements are firmly rooted in E flat. It is arguably Simpson's most friendly, good-humoured symphony, and the one that seems to bear the strongest spiritual affinity with his great hero, Beethoven. The orchestral requirements are notably larger than in the Second Symphony: 3 flutes, all of which double piccolo (a device also used in the Third Symphony), 2 each of oboes, clarinets and bassoons, double-bassoon, 4 horns, 4 trumpets (2 in B flat, 2 in D), 3 trombones, tuba, side drum, cymbals, timpani and strings.

The opening 'Allegro moderato' is fresh, buoyant and transparently scored throughout; indeed, the composer once suggested that he might have been subconciously recalling the sound world of the first movement of Nielsen' s Sixth Symphony (Sinfonia Semplice). Perfect fourths play a crucial part in the opening movement, as they do in the entire symphony, and this is immediately evident in the Symphony's first phrase, announced on violins and cellos.

This is not a sonata-allegro in the traditional sense, but the initial statement does reappear frequently as the music continually evolves and develops. Only at the end is a brief climax reached, but this suddenly disappears, leaving the strings to settle on a bare fifth (E flat and B flat) as fragments of former themes are wittily scattered around in all directions.

The titanic second movement is a tour de force. It is Simpson's first symphonic scherzo, though no listener would sense this when experiencing the massive confidence and breathtaking energy that this music unleashes. Again the influence of Beethoven is felt, in this case the 'Molto vivace' from the Ninth Symphony. Both works adopt a vigorous one-in-a-bar pulse, are cast in fully developed sonata form, with the first part repeated, and are examples of the most massive orchestral scherzi in symphonic literature. Simpson's central Trio is equally remarkable: a quotation from the first movement of Haydn's Symphony No 76 appears, alternating with mounting interjections. The interjections grow in strength and ferocity, but the Haydn remains innocent and unaffected despite the surrounding turbulence. The last and most shattering interjection leads directly back to the Scherzo, which is not a da capo repeat as in Beethovenian scherzi; the material is all familiar but the music now develops in fascinating new directions.

The tempo remains unaltered in the extended central section, heralded by a noble horn solo, though the bars are shortened from 4/4 to 6/8. Here serene, graceful counterpoint floats past, the texture is still transparent and the mood warmly expressive. After a sudden pause, and hushed piano on full orchestra, the music relaxes into the original 4/4 pulse for a shortened reprise of the first section, the original ideas now reduced to the barest essentials. The Finale begins attacca and is for the most part a free recapitulation of the first movement, though now converted into a swinging, triple-time metre. The orchestration is more full-blooded and weighty. Again, the interval of the fourth is prominent, and throughout this Finale the first movement's themes undergo continual transformation and metamorphosis, both rhythmically and melodically, so as to gain new vitality and create new energy. Whereas the first movement faded away at the end, the coda of the Finale actually begins with a delightful, innocent, waltz-like tune on second violins, demonstrating a supreme gift for melodic simplicity and directness that Haydn would surely admire.

This coda is long, cumulative, and generates immense excitement. A final crescendo is built, the music flexes its muscles — that is to say by expanding and contracting its phrase-lengths — and even elements of the Scherzo are introduced to add fuel to the fire. The composer has described this closing section as 'full of fierce joy' when the final bars blast out a powerful transformation of the Symphony's opening phrase.