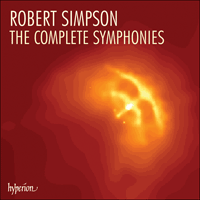 ‘One of the outstanding recording projects of our time … this Hyperion series deserves to stand as a monument while other more superficially glamorous ventures rise and fall around it. If it does not do so, and if it does not eventually force Simpson’s breakthrough into the orchestral repertoire, there will truly be no justice’ (Gramophone)
‘One of the best-kept secrets of post-war British Music … utterly compelling’ (The Guardian)
‘In lieu of live shows, please buy any or all of the Hyperion Simpson discs. Buy the Ninth Quartet, the First Quartet, the Third and Fifth Symphonies, the Second or Fourth, all the quartets, all the symphonies … but start soon, or you’ll miss a lifetime’s inspiration. This is serious music, through which one determined Englishman hurled down the gauntlet to the self-regarding second half of the 20th century, and helped justify once more music’s claim to be the most elevating, questing, and stimulating accompaniment to the life we all lead’ (Fanfare, USA)
‘This set is the way to acquire the Simpson symphonies’ (MusicWeb International)
‘These are outstanding recordings of music that is always adventurous and challenging yet ultimately rewarding’ (NewClassics.com)
‘Hats off to Hyperion for such a sensibly priced and stylish repackaging of one of the great recording projects of the last two decades – the recording of the eleven symphonies of Robert Simpson … In a superbly cogent and insightful booklet-essay newly commissioned for this slim-line box set Calum McDonald describes Robert Simpson’s cycle of symphonies as “surely one of the most imposing bodies of work of any British composer … Simpson is a symphonist of European stature, whose music deserves to be known the world over.” This last disc was dedicated to the memory of Hyperion’s indefatigable founder Ted Perry and forms a handsome conclusion to a towering achievement for everyone involved’ (Classical Source)