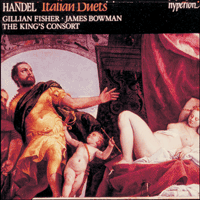 ‘A feast of early Handel and glorious singing. A musical delight from beginning to end. Unreservedly recommended’ (The Sunday Times)
‘lmpeccably sung’ (Fanfare, USA)
‘Yet another top quality Hyperion disc. Recommended with the utmost enthusiasm’ (CDReview)
‘In 1990 both the soloists, Gillian Fisher and James Bowman, were in their vocal prime, and this CD is a fine testimony to their vocal dexterity and fine-toned musicality. They are ably accompanied by the King's Consort, but ultimately it is the sheer beauty of Fisher and Bowman's singing which makes this bargain-priced disc well worth investing in’ (Early Music Forum of Scotland News, Scotland)

Handel arrived in Italy in 1706 from Germany as a somewhat rough composer, full of potential, but knowing (according to his friend Mattheson) ‘how to compose practically nothing but regular fugues’ and with an uncertain command of form and melody. Within five years he had emerged as a polished and well-equipped composer with a formidable battery of first-rate compositions. For Handel the Italian years were decisive, for Italy was the home of opera, oratorio, the chamber cantata, the concerto and the sonata. He met all the leading composers: Lotti, Vivaldi and Albinoni in Venice, Perti in Florence, and Alessandro and Domenico Scarlatti, Caldara, Corelli and Pasquini in Rome.

Handel had first sprung to public notice in Hamburg where, in 1703, Mattheson had introduced him into musical circles and helped him with his compositions. He was already an accomplished organist, and in the same year Handel visited the ageing Buxtehude with a view to succeeding him as organist of the Marienkirche. The enthusiasm quickly waned, as had Bach’s, when he realized that an additional condition of the job was to marry Buxtehude’s daughter, herself no youthful beauty. It proved to be the opera, not the church, which attracted Handel’s attention. His first two operas, Almira and Nero were performed in quick succession in 1705: the first was a considerable success, but the second, now partly lost, was a failure which, with Keiser’s hostility to a potential rival, hindered Handel’s career in the opera houses of Germany and may have encouraged him to look to other countries. Handel composed many sonatas, arias and cantatas while in Hamburg: those which do survive are strong in harmony and counterpoint, but are often unbalanced in form, with little of the melodic flow which marks his later works.

While in Hamburg Handel met Prince Ferdinando de’ Medici, son of the Grand Duke of Tuscany, who invited Handel to visit Italy, and particularly Florence. According to Mainwaring, Handel resolved to go ‘as soon as he could make a purse for that occasion’, and his first visit took place during the Autumn of 1706, with the principal aim of gaining experience of Italian opera. His first Italian opera, Rodrigo, was produced at the Academia degli Infuocati in October 1707, and was greeted with much pleasure by the Grand Duke. Handel also visited Rome, and his excellent management of patronage found him the favours of three more noblemen, Cardinal Pietro Ottoboni (at whose palace Il trionfo del Tempo e del Disinganno was probably first performed), Cardinal Carlo Colonna and, most important of all, Marquis Francesco Ruspoli. Handel’s compositions for Ruspoli included eight or more cantatas, three Latin motets and the oratorio La Resurrezione, staged (in April 1708) in all but name as a spectacular opera. The previous year, again in Rome, had seen the large-scale Latin church compositions Dixit Dominus, Laudate pueri and Nisi Dominus, perhaps for the Carmelite Vespers. In Rome, too, he met the influential priest, composer and diplomat Agostino Steffani, and in Venice he made the acquaintance of Domenico Scarlatti (there followed the famous keyboard contest at Ottoboni’s palace) and Cardinal Vincenzo Grimani, owner of the S Giovanni Grisostomo theatre, who wrote the libretto of Agrippina.

Mainwaring records that ‘besides Sonatas and other Music’ Handel wrote 150 cantatas in Rome, and certainly about 120 survive. But often forgotten among the ‘other music’ from that time are fifteen Italian chamber duets and two trios, composed most probably for the drawing rooms of Italian aristocrats, with Handel himself at the keyboard. Though often more intimate in mood, the duets frequently differ little in content from many scenes in the operas, and time and time again we come across music which ultimately found a more familiar place, whether consciously or not, in many of Handel’s major operas and oratorios. The Italian duets were composed in three batches. The first three duets were written in Italy prior to 1710, and a second, larger batch was copied in Hanover around 1711, though probably composed before then. This second group shows the influence of Steffani, whom Handel evidently used as a model. Why Handel then returned to the form thirty years later is not clear, but between 1741 and 1745 he produced another seven duets. Here too, as with the earlier examples, we find their material reused in major oratorios.

Of the twenty-one duets, six are for two sopranos, three for soprano and bass, one for soprano and tenor, one for two altos, and ten are for soprano and alto. In addition there are three trios for two sopranos and bass. Of the duets for soprano and alto, all seven from the earlier period are recorded here, together with two of the later examples. The duets justify their place in the repertoire for purely musical reasons, but for the Handelian detective they provide an added bonus: one can spend many hours tracing themes heard in the duets through to their final, often illustrious, destinations. Indeed, the sheer number of these recycled themes suggest that Handel liked what he had written, for he was always quick to reuse a good tune.

Tanti strali al sen mi scocchi was completed by 1710–11, and demonstrates a whole range of Handel’s vocal writing, from the virtuoso da capo first movement, through the suspensions of the slow middle section to the brilliant fugal movement (later used in Solomon for ‘Take him all’) which concludes the duet.

A mirarvi io son intento, too, dates from the same time, and opens with a theme that reappeared two years later in the ‘Utrecht’ Jubilate as ‘Be ye sure that the Lord he is God’, itself then arranged as the ‘Chandos’ Jubilate. The slow middle section formed the basis in 1735 for the final chorus of Alcina, and the final fugal section suggests that Handel’s original singers were blessed with outstanding techniques.

Troppo cruda also requires singers with strong technique, and, in its four movements, is conceived on a larger scale. The passagework of the imitative second movement requires nimble voices, and notable too are the long harmonic sequences of the slow section ‘Infiammate saettate’, and the sighing word-setting of ‘sospirar’ in the closing movement.

The two movements of Se tu non lasci amore probably date from 1711. The first section, with its walking bass, was reused some thirty years later in Messiah as the duet ‘O death, where is thy sting?’. Sections of the concluding triple-time movement were used in the 1718 oratorio Esther, and at the end there is even a hint of the famous Air from the Water Music.

Conservate, raddoppiate also dates from 1710–11, and finds Handel in particularly melodic vein in the opening movement. The three-note motif that permeates the second movement ‘Nodi voi’ can be traced all over Handel’s work, from the opus 1 sonatas, through the concerti grossi, to various operas and oratorios. Just within its original context the motif’s use, particularly at the recapitulation, is especially imaginative.

Langue, geme, sospira e si lagna is one of the few duets with a text that is attributable, in this case to La caduta del regno dell’Amazzoni by de Totis. Its first movement is, even by Handel’s standards, especially full of pathos, with the dove cooing and sighing with great eloquence. The theme of the strong second movement later appeared as ‘Thou hast prevented him’ in the Coronation anthem The King shall rejoice.

With Nò, di voi non vo’ fidarmi we come to a duet composed in 1741 for two sopranos, then arranged just over a year later for soprano and alto. Though there is much in common with the compositions of thirty years earlier, Handel uses a three-section plan, with movements of a substantial length, and a style that could as easily come from an opera as from a chamber duet. Additionally there is more detailed interplay between the voices, and a more dramatic use of the text, especially in word repetition.

Sono liete, fortunate appears to have been written by 1710, and demonstates with its elegant suspensions and melodic lines that the early criticisms of Handel were already long out of date. The fugal writing for which he had been initially admired was still as powerful as ever, and the final movement, later used in the overture to Judas Maccabaeus, finds Handel’s vocal writing at its most thrilling.

Fronda leggiera e mobile dates from around 1744, and may well have been written at the same time as Belshazzar (first performed in March 1745), for the lively opening theme appears in that work too (and also in the first concerto ‘a due cori’ of two years later). The delightful duet which closes the work could just as easily be a tender love duet from one of the operas.