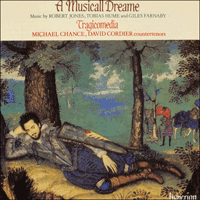 Sublime musical expression does not necessarily proceed from serene spirits whose philosophical loftiness leaves them unmoved by the push and shove of the marketplace. Prefaces to printed editions of music in the sixteenth and seventeenth centuries seldom reveal much of the personality behind the writer's effusive urge to prostrate himself before the dedicatee and his invocations to the muses to make worthy his humble efforts. Robert Jones, Tobias Hume and John Dowland were exceptions in this regard and often used their printed prefaces as a platform for polemics, self-defence and bile. In so doing they illumine the contemporary pressures of public opinion and changing fashions, as well as highly individual — not to say curmudgeonly — natures.

Hume has the bluster and directness of the proud old soldier. He's had enough of praises for the overly genteel lute and is out to prove that the gamba can outdo the lute in every respect. His music is as quirky as his literary style and his claim to originality is more than just.

Dowland's preface to A Pilgrimes Solace (1612) has an overwhelming atmosphere of pride and bitterness. He who has travelled the world and found the applause of the powerful and famous returns to find himself displaced in his own land by 'Young men, professors of the Lute, [who] vaunt themselves, to the disparagement of such as have beene before their time, (wherein I my selfe am a party), that there never was the like of them.' He quotes Hume's attacks and asks why these upstarts have done nothing to defend the venerable name of the lute. Then sadly: 'Perhaps you will ask me why I do not under goe this busines myself? I answere that I want abilitie, being I am now entered into the fiftieth year of mine age: secondly because I want both meanes, leasure, and encouragement.' Thomas Mace, writing in 1676, adds a postscript to this dispute in the form of a conversation with his lute. His book is a monument to the musical glories of former times and a wistful reflection on his own world, 'grown so Slight'.

Jones's speciality was rather the light air and the colourful image. He followed >A Musicall Dreame with The Muses Gardin for Delights (1610), in which he also pursues the garden image playfully throughout a preface entitled 'To the friendly Censurers'. His closing statement leaves no doubt of his attitude towards the unfriendly sort: 'If these delights of Flowers, or varietie of Fruites, may any wayes be pleasing to your senses, I shall be glad. Otherwise I will vow never to set, sow, plant or graft, and my labours henceforth shall cease to trouble you, if you will needs mislike, I care not. I will prevent your censures, and despise your malice, if you despise me, I am resolute, if you use me with respect, I bid you most heartily — Farewell.'

Coprario and Notari belonged to a new generation of artists who would help to establish on English soil another musical language, the Italian. John Cooper had travelled widely on the Continent and probably visited Italy. Certainly on his return he had become Giovanni Coprario and proceeded to write music of a pronounced individuality and mannerism which could arguably reflect Italian influences. Like Coprario, Angelo Notari of Padua belonged to the circle of musicians around the young Prince Henry (whose untimely death was bewailed in Coprario's Songs of Mourning, 1613). A manuscript compiled by Notari (and now in the British Library) demonstrates his knowledge of contemporary Italian music, and in particular of Monteverdi.

The many aggressive, disparaging or embittered remarks of our chosen authors might lead us to expect a musical dream with rather awkward bedfellows of competing lutenists and gamba players, English and Italian. Quite the contrary is the case. At this safe distance of time, we can enjoy the musical diversity of an extraordinarily creative period without concerning ourselves with petty arguments or having to take sides. We are indeed allowed to experience a 'Musicall Dreame' of an idealized past, outside real time, much as Robert Jones wished for his 'friendly censurers', and as we wish for ours.