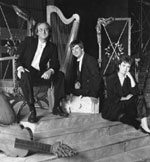 Erin Headley, Paul O'Dette, Stephen Stubbs and Alexander Weimann—four of the world’s leading Baroque instrumentalists—are Tragicomedia. With its unusual instrumentarium of viola da gamba, lute, chitarrone, and harpsichord, the group has played a major role in realizing the musical riches of the basso continuo era. In 1600 Agostino Agazzari described the enormous palette of instrumental color—including lutes, chitarrones, keyboards and lirones—necessary for the effective realization of an accompaniment. This was the inspiration for Tragicomedia. In repertoire ranging from Monteverdi to Bach, Tragicomedia explores every musical genre from lute song to fully-staged Baroque opera.

Many of the group’s recordings have won prestigious prizes including a Gramophone award in the UK and an Edison award in Holland. Tragicomedia has been the continuo ensemble for the Boston Early Music Festival’s productions since 1997.