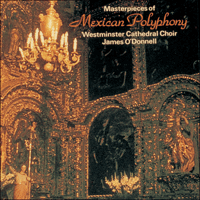 ‘This is a magnificent recording. Pure Mexican gold’ (Gramophone)
‘Unusual, timely, interesting, and beautiful’ (Fanfare, USA)
‘If like me, your knowledge of Mexican music was previously, shall we say undeveloped, you may similarly be stunned by the treasures unveiled here’ (The Music Magazine)

The conquest of what became Mexico, the overthrow of the Aztecs, the destruction and rebuilding of Montezuma’s city of Tenochtitlan as the Spanish City of Mexico, happened all with devastating suddenness. Whatever feelings we have in our own time about the plunder of wealth, the enslavement of a people, the imposition of a foreign government and forced conversion to new religious beliefs, we must place ourselves in the minds and hearts not only of the soldiers of Spain in their ambition for power and wealth but also in their total belief in the rightness of the Catholic Faith, and Spain’s sacred duty to spread God’s truth to the new land and its heathen, savage people.

This basic motivation was not simply an adjunct to the natural greed of the conquistadores for power and wealth. The religious zeal of the first missionaries cannot be disputed. Their success was achieved through education and driven by a genuine desire to save souls. Music played a major part: it was deliberately and skilfully used with enormous success.

In succession, Dominican, Franciscan and Augustinian friars and canons set up missions all over the conquered lands. The very first in Mexico were from Ghent in the Spanish Netherlands and we credit Pedro de Gante, personally authorized by the Emperor, as the earliest and most influential musical missionary.

Within just a few years the Aztec languages and dialects, notably Nahuatl, had been mastered, and the natives were being taught in schools and religious foundations; Old Spain was being reproduced in New Spain. In 1531, the year when Pizarro invaded Peru, a new city was founded in Mexico. It was typically Spanish in every way, but built with native and imported negro labour; it was called Puebla de los Ángeles. A cathedral was started, one that would rival the great cathedrals of Spain itself. In that same year of 1531, the miracle of the Virgin of Guadalupe, the Virgen morena, established a centre of Catholic devotion at just the right time. The building of New Spain in the image of the old was now irreversible. Musicians and craftsmen were imported, the natives trained in all the skills of instrument-making. By mid-century the energies of the conquerors and the conquered were totally directed to Hispanic ends, and the Empire entered the same course economically and socially as the homeland. Privilege was for the Spanish-born, from the Viceroy down. All the best positions in government and church were appointed from Spain for Spaniards.

Yet the innate talents of the Mexican Indians were acknowledged. Their musicality was recognized very early by Pedro de Gante and his colleagues. They amazed travellers with their quick ability to read, write, sing and play. Their craftsmanship was famed. Negroes, imported for their physical strength, multiplied, and the influence of their dancing and drumming was soon widespread.

The authorities imported the ecclesiastical organization and regular uses of the Cathedral of Seville which became the mother church of New Spain. It was natural that at Puebla and at Mexico City Cathedral (the present edifice was started in 1573) the music should also follow the usual customs of Seville. Puebla showed independence by adopting some traditions from Toledo.

The musicians and their repertoire showed every characteristic of their Spanish origin. It was music by Morales that moved the assembly so much when the death of Charles V was commemorated in 1558. It was Morales whose works, especially his Magnificats, formed the basis and most lasting influence in the New World churches and cathedrals. Of composers not Spanish, there is no doubt that Palestrina became the most popular all the way from Cuzco, Lima, Quito and Bogotá to Guatemala and the numerous cathedrals of Mexico itself.

The first really notable maestro de capilla in Mexico was Hernando Franco. He was born in Spain in 1532, near Alcántara in Extremadura, the land of the conquistadores. As a boy chorister he served at Segovia Cathedral in Old Castile; there he met the brothers de Álamo who were to lead him first to Guatemala and then to Mexico City. Franco certainly was at Guatemala in 1573 and he spent his last ten years from 1575 as maestro at the new and incomplete Mexico City Cathedral. Some of Franco’s music is still to be found in Guatemala but his cycle of Magnificats (fourteen out of sixteen survive) and many other works are found in Mexico and Puebla together with his two settings of Salve regina.

It is the Salve regina in the version for five voices (two tiple or treble parts) that is performed here. The plainchant verses are taken from Luys de Villafranca’s tutor published in Seville in 1565. Franco set ‘Et Jesum benedictum’ in two versions and we have used the second, which is for the high voices while the basses rest. Franco is expansive, one might say diffuse; he takes twenty-five bars of modern score to set the last three words, but his music is expressive and very singable.

Quite a contrast comes with Padilla’s pair of double-choir works for the Office of None. Juan Gutiérrez de Padilla was born in or near Málaga probably in 1590, some five years after Franco’s death in Mexico. Trained in his home city, his first appointment as a maestro was at Jerez, his second was at Cádiz; then he is found as assistant at Puebla Cathedral in 1622. Seven years later he was appointed maestro and stayed until his death in 1664. His work was so appreciated by the authorities that a great deal of his music was ordered to be copied into a great choir book shortly before his death. This fine manuscript survives as Libro de coro XV at Puebla Cathedral. It is from this great collection that Padilla’s music in the present recording has been edited. It shows him to be the most talented and confident of the composers of the colonial period in Central and South America. A great number of motets, antiphons, Psalms and Lamentations survive. He wrote short hymns and big Masses, a Passion and some dramatic funeral music. He wrote for double choir in many works in the text-driven harmonic chordal style that was fashionable in Spain for most of the seventeenth century, yet he adopted a thoroughly polyphonic ‘old’ style for some motets and in his Lamentations, albeit spiced with harmonic twists and dissonances very much of his own time.

The works for None may raise an ‘expert’ eyebrow. The short Office of None (usually recited rapidly, in the afternoon) seems to have been taken over in some Spanish and colonial churches by confraternities or by convents of nuns for special services. A number of settings of the Psalm Mirabilia testimonia survive in Mexico and in Spain (e.g. Valencia). They often bear such titles as ‘Salmo de Nona para las Religiosas de Madalenas’. Padilla’s Mirabilia happens to survive in a convent choirbook (Holy Trinity, Puebla) now in the National Institute of Fine Arts, Mexico, as well as in the Puebla Cathedral ‘Padilla Choirbook’. The setting of the Versicle and Response (Deus in adiutorium) is clearly paired with the Psalm and they have common endings in the music of the doxology. Padilla sets these texts with real verve and his declamation of the words is resourceful and lively. The choirs call, answer and combine in great splendour.

It should be mentioned at this point that the standard continuo favoured in Spanish churches consisted of one or more organs with the bass lines doubled with the bajón (bass dulcian/curtal) and not infrequently the harp. So standard was this accompaniment that it was allowed in the seasons such as Holy Week when the ministriles (wind and strings) were banned.

Padilla’s six-part Lamentations are properly traditional, being set almost archaicly in polyphony that is firmly based on the Spanish (Toledo) Lamentation tone. As always the Hebrew letters—Aleph, Beth, and so on—are composed to sad flowing vocalizations between the verses.

The somewhat massive approach of Padilla is followed by two pieces for four-part choir by the one composer of importance who was actually Mexican by birth. Francisco López Capillas was born in Mexico City in about 1605 of pure Spanish parentage and thus termed ‘criollo’. His musical career took him to Puebla’s rich cathedral and there he assisted Padilla and served as an organist and bajonista. He moved in 1648 to Mexico City to be assistant to Fabián Ximeno and then succeeded as maestro and organist at the Cathedral in 1654. He died at the height of his powers in 1674. López has left us eight Masses and a set of eight Magnificats found in manuscripts in Mexico and in a superbly written choirbook now in the National Library in Madrid. There is a considerable collection of other works still extant. The general impression is one of contrast with Padilla. López writes more often in four parts and never for double choir. His music is fresh, simple and pleasant. He seems not to have written anything that exhibits a grand scale or very rich sonority, nor does he try to write with strong emotion as Padilla does in Passiontide or Requiem music.

López is direct and delightful in his Easter Alleluia (based on the Sequence Victimae Paschali laudes) and in his Magnificats. It is true that he did indulge some very old-fashioned and learned musical fancies in his Hexachord Mass (Missa super scalam Aretinam), so much so that he found it necessary to defend his archaic notation and procedures in writing, just as the later Catalan Francisco Valls had to do after the disproportionate fuss over one dissonance in his first Hexachord Mass.

The penultimate work in this recording returns to the Salve regina text and to Padilla, again a contrast that is illuminating. Padilla’s setting for two choirs seems an age away from Franco’s. Indeed, they were probably composed some sixty or seventy years apart. Padilla is at his best in this piece. He uses all the techniques of contrasted textures and voice groupings; he writes homophonic and antiphonal declamation, then with reduced parts he weaves a dangerously inflected polyphony to emphasize the groaning and weeping in the vale of tears. At ‘gementes’ he gets into a strange state of harmonic instability that cannot be edited away.

Finally, we have another native Spaniard, from Seville, one who takes us across the boundary of 1700, Antonio de Salazar, who represents the last of the truly conservative Hispanic composers before the all-conquering Italian style took Spain and its Empire by storm. Salazar came to New Spain directly to the maestro’s post at Puebla and from 1688 held his final position at the Cathedral in Mexico City. He was famous for his villancicos, some of which had texts by the great Mexican writer and poetess Sor Juana Inés de la Cruz. Salazar’s O sacrum convivium deserves regular use in our church services.

Thanks are due to Dr Steven Barwick for his transcriptions of the Alleluia by López and Salazar’s motet. JoAnn Smith LaTorra provided López’s Magnificat, and Bruno Turner prepared Franco’s Salve regina for this recording. The works by Padilla are published by Mapa Mundi, 15 Marvig, Lochs, Isle of Lewis, Scotland HS2 9QP, edited by Ivan Moody and Bruno Turner.