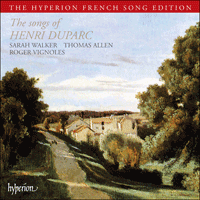 ‘Roger Vignoles is a most sympathetic accompanist, and virtuosic where virtuosity is called for, and the whole set is at one with Duparc's own evaluation of these magnificent songs’ (Gramophone)
‘For a disc of all 17 of Duparc's melodies, the clear first choice is Sarah Walker and Thomas Allen’ (BBC Music Magazine)
‘Another impressive first for Hyperion. There are few singers in Britain today more at home in the French language, and both are well attuned to Duparc's subtle and refined musical world’ (BBC Record Review)
‘The Hyperion issue is as near an ideal Duparc record as could be’ (The Penguin Guide to Compact Discs)

Marie Eugène Henri Fouques-Duparc, who shortened his name to Henri Duparc on the advice of a music publisher, was born in 1848. By the time he was thirty-five he had completed the handful of songs which were to assure his immortality. He wrote no more until he died aged eighty-five in 1933.

As a boy Duparc studied at a Jesuit school in Paris where the music teacher was César Franck. At first he was more interested in the law than in music. Gradually Franck, sensing an inborn talent, encouraged his aptitude for music by giving him Bach and Beethoven scores to read. At the age of nineteen Duparc composed a cello sonata and soon Franck was describing him as his most gifted pupil. Two years afterwards he published a suite of piano pieces, and in 1870 he brought out his first collection of songs which included Chanson triste and Soupir. A visit to Munich with his friend Saint-Saëns for the premiere of Die Walküre was a revelation to him and he became a confirmed Wagnerian. Five years later he wrote the symphonic poem Lénore inspired by the Bürger ballad, a Romantic tale about a girl who, awaiting news of her lover away at the wars, prays for death to release her from her anguish. Her prayer is granted when a stranger calls and takes her on a nightmare ride across country to a graveyard where he reveals himself to be Death in person.

Lénore was Duparc’s only major orchestral work and, apart from an opera based on a Pushkin story with which he tinkered for some ten years before destroying it in a fit of despair, he was to complete only the dozen or so mélodies for which he is famous. These were produced during the extended rush of high inspiration that lasted throughout his early manhood. As a perfectionist who was his own severest critic, he ceaselessly revised and polished them, destroying far more than he ever allowed to be published.

Apart from music his chief interests were philosophy, literature and painting, though his heavy moustache and military bearing were at first sight oddly incompatible with the tender, delicate songs he composed. When working he needed absolute silence and could not bear the slightest interruption. He wrote with a triple-pointed gold nib thick enough to indite a filled-in note at a stroke. All composition ceased, though, in his mid-thirties when he was attacked by an obscure nervous disease. Then he began to lose his eyesight and, despite an operation for glaucoma, went to all intents and purposes blind. The last forty years of his life were sustained by religious resignation and hopeful trips to Lourdes. He wrote: ‘The loss of my sight and the deprivation of what has been my life—music and drawing; music above all—is such a sorrow for me that God could only console me for it by giving me Himself: that is what He has done, and, far from regretting anything, I thank Him. The joys of music are of little account compared with the Peace He gives. And then, the eyes of the soul see things from a higher plane than those of the body …’

Of the songs on this disc, Sérénade, the Romance de Mignon, Le Galop and the duet La Fuite are early works that Duparc suppressed because they did not reach his abnormally high standard, although the manuscripts have since been rescued. L’invitation au voyage, one of his most famous mélodies, belongs to 1870. When Baudelaire published his Les Fleurs du mal from which it comes, he said he hoped that some composer of genius would set the verse and offer it to the woman he loved. That is precisely what the twenty-two year-old Duparc did, for he dedicated it to his wife, an Irish girl from County Cork. The impressionistic accompaniment, so exquisitely attuned to the words, creates a luminous haze with its harmonic fluency and serene rhythms.

Extase and Testament show that even when Duparc set minor poets like Lahor and Silvestre, the middling quality of the words by no means hampered the flow of his genius. Both settings have a flavour which recall his hero Wagner. Chanson triste, heavily revised, is an early song with an echo of Gounod, although in Elégie, which Duparc probably translated into French with the aid of his Irish wife, the atmosphere is Tristanesque.

Au pays où se fait la guerre, an even earlier work of 1869, is thought to contain borrowings from the unfinished opera which Duparc eventually destroyed. The dramatic rhythm and urgent phrasing come over particularly well in the orchestral version he later made.

Fauré and Hahn also set Leconte de Lisle’s Phidylé, which in Duparc’s case must be accounted one of his finest achievements with its lyrical splendour and beautifully graded expression, all to be quietened at the end by a tranquil postlude in the accompaniment. La vie antérieure, another Baudelaire setting, was the last song Duparc ever composed and one of his finest. Originally intended for voice and orchestra, it sounds nonetheless perfectly natural and original in the piano version he afterwards made. Here he distils an aching nostalgia and captures in purely musical terms that frisson nouveau which Victor Hugo attributed to Baudelaire’s revolutionary poetry.

The gentle lullaby of Sérénade florentine, smooth and graceful, can be contrasted with the bold drama of La vague et la cloche, which, first written for bass and orchestra, was arranged for the piano by Duparc’s close friend Vincent d’Indy. Equally dramatic, declamatory even, is Le manoir de Rosemonde, in which unity is preserved by a piano episode linking each section. As Lotte Lehmann pointed out, ‘something akin to madness rages through this song’. Lamento takes extracts from a poem already set by Berlioz and is dedicated to Fauré—a suitable choice because it has Fauré’s own characteristics of supple grace and feline motion. Duparc was only twenty when he wrote Soupir in 1868, but it shows clearly, in its refined yet passionate utterance, just why he was destined to rank among the greatest of all French writers of mélodies.