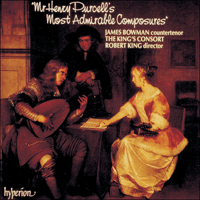 ‘James Bowman must surely be the finest vocal interpreter of Purcell today. His grasp of sentiment, his sense of timing, and his enunciation, are unsurpassed’ (Gramophone)

When Henry Playford published the first volume of Orpheus Britannicus, an anthology of Purcell’s songs, he wrote: ‘The Author’s extraordinary Talent in all sorts of Musick is sufficiently known, but he was especially admir’d for the Vocal, having a peculiar Genius to express the Energy of English Words, whereby he mov’d the Passions of all his Auditors.’ Purcell was indeed widely renowned to be a quite exceptional master of many types of composition. At the Court he was known for his ceremonial music and in particular for his Odes; in the church his services and anthems ensured a fine reputation, and his operas and incidental music for some fifty plays ensured that his name was widely known by the general public.

For a composer of such wide-ranging talents, and one of prolific output, it has been described as ‘almost embarrassing’ to find such riches for the solo voice. Over a hundred solo songs survive, ranging from simple ditties to full cantatas, to which can be added nearly one hundred and fifty songs from the theatre music. Within these works are a vast range of styles, forms and devices, and much music of great stature and importance. Purcell’s fondness for the countertenor voice is well known, and indeed he was reputed to have had both a good bass and countertenor voice. It is not surprising therefore to find that much of his best vocal music is for countertenor, and many other songs, though written originally for a different voice, can successfully be transposed (a regular practice of Purcell’s day) to fit this most expressive of voices.

We sing to him whose wisdom form’d the ear was first published in the 1688 Musica Sacra. Ingelo’s religious poem, aptly enough praising the God who saw fit to create the voices and ears with which humankind could make and hear music, provided Purcell with a splendid text for a setting which has a mood of expansive grandeur.

What shall I do to show how much I love her? comes from one of Purcell’s five semi-operas, The Prophetess, or The History of Dioclesian, and dates from 1690. The setting is a simple one, largely syllabic, and the text (by Betterton, after Fletcher) follows a familiar story, with the amorous suitor wondering what more he can do to win the affections of his love who, not unusually, is playing ‘hard to get’.

With How long, great God? we move into an area where Purcell was an undoubted master, that of the semi-recitative. John Norris’s inspired devotional poem The Aspiration provided Purcell with an ideal vehicle with which to use his considerable gifts of word-painting. Examples are everywhere, amongst them phrases of genius: the sudden minor switch at ‘How cold this clime!’ and the delicious harmonic uncertainty of ‘my erroneous needle does decline’.

In Not all my torments can your pity move Purcell was provided once again with a text suitable for a dramatic setting; the vocal line gives the impression of a singer improvising florid ornaments on a simple melody. Melismas on important words abound, with angular intervals for words such as ‘pity’, and a splendidly controlled feeling of acceleration at the repeated word ‘increases’.

Music for a while was one of two songs that Purcell wrote for Dryden and Lee’s play of 1692, Oedipus. The song is constructed over a repeated ground bass, but one that, in order to achieve variety, modulates in its middle section. Such was Purcell’s melodic individuality that early editors disbelievingly ‘corrected’ the delicious chromatic discord at ‘eternal’!

Fairest isle was one of Purcell’s biggest successes in King Arthur, first performed at the Dorset Garden Theatre in 1691. A patriotic song in praise of Britain which is sung by Venus near the end of the opera, its two strophic verses (separated here with instrumental verses) demonstrate Purcell’s genius for writing a tune of memorable yet simple melody.

The Knotting Song (‘Hears not my Phillis’) is a late work, dating from 1694. Purcell treats Sedley’s text very much tongue in cheek, especially in the refrain which shows the attempted lover’s frustration at his advances to one Phillis being rebuffed, not by words of dismissal, but by Phillis’s constant, expressionless knitting.

Purcell’s semi-opera of 1692, The Fairy Queen, was a setting of a libretto after Shakespeare, thought most probably to be by Settle. For The Plaint (‘O, let me forever weep’), in which Laura mourns for her departed lover, Purcell uses a ground bass of an unusual length, seven bars, which enables the singer’s phrases and the plaintive obbligato violin to overlap repetitions of the bass pattern, creating a continuous texture. Purcell also introduces transpositions of the bass, and employs two contrasting sections, the first in a major key, the second a recitative-like passage ‘He’s gone, his loss deplore’ where the bass comes to a complete halt.

A favourite construction of Purcell’s, and one that he employs to good effect in several of the Odes, is that of a movement which begins with a ground bass and a solo voice (usually an alto), with the melody subsequently taken over and developed by the tutti strings. The Ode for the welcome of James II in 1686, Ye tuneful Muses contains one such gem, With him he brings the partner of his throne, where the alto is given a splendid solo, full of the best features of Purcell’s vocal writing. The orchestral entry is marked by a delicious modulation up a fifth, and then comes a typically inventive section of string writing.

Purcell provided just one song and a duet for Dryden’s play of 1694, Tyrannic Love, or The Royal Martyr. Purcell had to set many a bad libretto, but Dryden was one of the best writers of the time, presenting Purcell with few problems. Ah, how sweet it is to love has a bass line founded almost entirely on one rhythmic motif over which Purcell’s melody once again demonstrates his punctiliousness in preserving the natural speech rhythms of English words.

Celia has a thousand charms was one of three songs Purcell provided for the play The Rival Sisters, first performed in 1695. It is in the style of a small cantata, with an opening recitative full of florid melismas, and a minuet-like second section.

The fatal hour comes on apace also follows the same two-movement pattern, and Purcell’s response to the gloomy text is one of his finest, full of graphic illustration and melodic and harmonic inventiveness.

Purcell made three settings of Heveningham’s If music be the food of love between 1692 and 1695, of which the first setting, recorded here, is the simplest in style, with the main melisma reserved, not surprisingly, for the sentence ‘That you are music everywhere’.

The Fairy Queen contains a delightful song, One charming night, for a slightly wicked character called Secresy. Purcell originally scored the accompaniment, meant to convey the mysterious impression of a magical, dark night, for two recorders. Transposing the music up a tone, we used another equally other-worldly colour, that of two muted violins: the resulting sound is quite similar to that of two pardessus de violes.

Another song from Dioclesian is Since from my dear Astrea’s sight. Again, this is a perfect example of Purcell’s skill at writing expressively on a small scale, with beautiful musical illustrations of words such as ‘mourn’, ‘alas’ and ‘weeping’, and a typically dolorous series of repetitions of the final word ‘die’.

Purcell’s Ode Welcome to all the pleasures was commissioned by a body called The Musical Society for their first celebration of St Cecilia’s day in 1683. A work of great freshness and vitality, it contained one movement Here the Deities approve which found such success that it was later printed on its own in a keyboard transcription of 1689 entitled ‘A new Ground’. Purcell follows the same form as in With him he brings, with a ground bass and a delightful alto solo, taken over at the half-way point by string writing of great elegance and beauty.

An Evening Hymn (‘Now that the sun hath veiled his light’) is a complete contrast to the music that one normally associates with Purcell’s writing for the church. Here there is no question of impressing a Sunday congregation in the Chapel Royal, but instead a quite private and penitential attitude to God. Based on a five-bar ground, the work is a wonderful example of Purcell’s skill at handling the form, with the vocal entries adjusted to disguise repetitions of the bass, and a modulation introduced for variety in the middle of the piece. The quietly ecstatic ‘Halleluia’ that takes up the last forty bars or so is very different, but no less effective, to the settings normally heard of that word. There is surely no better example of the craftsmanship and genius of the man who, arguably Britain’s greatest composer, so richly deserved Playford’s accolade.