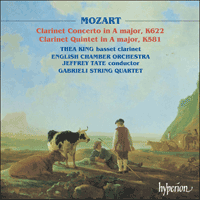 From his early ‘teens’, the wind instrument which most deeply engaged Mozart’s enthusiasm was the clarinet. But this enthusiasm was not to be completely fulfilled until the last seven years or so of his life, the time when he enjoyed the inspiring friendship of Anton Stadler, a clarinettist of genius for whom he composed some superb music, culminating in the Quintet, K581, and Concerto, K622, which stand high among the masterpieces of his last years. Besides their intrinsic qualities, these two works have a peculiar historical significance in that Stadler made a notable contribution to the instrument’s technical development which in turn had some influence on the style of the music.

Stadler, who was born in 1753, arrived in Vienna in 1773 and probably first met Mozart in the early 1780s, and like him became an active Freemason. Besides the clarinet, his other chosen instrument was the basset horn. Among Mozart’s instrumental music with prominent parts for the former are the Clarinet Trio, K498, and the piano-and-wind Quintet, K452; his vocal music includes a fine obbligato part in Sextus’s aria ‘Parto, parto’ in La Clemenza di Tito. In this opera Mozart also gave Stadler a star part in the basset horn obbligato to Vitellia’s heroic ‘Non più di fiori’. Early in 1791, Mozart began for him the basset horn Concerto in G, K621a, which he broke off at the 199th bar but ultimately reworked and completed as the first movement of the Clarinet Concerto. By all accounts, Stadler’s mastery of both instruments, especially the clarinet, was deeply appreciated by his contemporaries. One author wrote in 1785:

I have never heard the like of what you contrive with your instrument. Never should I have thought that a clarinet could be capable of imitating a human voice so deceptively as it was imitated by you. Indeed your instrument has so soft and so lovely a tone that nobody can resist it who has a heart.

By the later 1780s Stadler had come to realize that he could enhance the richness and romantic sonority of his clarinet by extending its compass downwards.

Assisted perhaps by Theodor Lotz, another Freemason, who was an all-round musician and an instrument-maker at the court, he seems to have achieved this extension gradually. By February 1788 Stadler had added two notes, down to the bottom written note D (sounding B), and in due course he added two more, taking the compass to written C (sounding A)—four additional semitones in all. It was indubitably for this extended instrument—now generally designated the basset clarinet—that Mozart composed his Concerto and probably also his Quintet. Had the autograph scores survived, the musico-historical facts would long have been known and accepted, but Mozart probably gave both to Stadler, and they soon vanished. The instrument too became obsolete, probably because the use of the extra keys was difficult. No contemporary specimen has come to light.

Mozart entered the Quintet in his thematic catalogue on 29 September 1789, and Stadler probably first played it at a concert given on 22 December in the Burgtheater by the Society of Musicians for the benefit of its widows and orphans. The catalogue entry for the Concerto is undated, but Mozart wrote to his wife on 7 October 1791 that he was scoring the finale. So it seems very likely that the performance which Stadler gave in Prague on 16 October was the first. Neither work was published until the turn of the century. In 1802, André of Offenbach brought out the first edition of the Quintet, and about a year earlier three firms—André, Breitkopf & Härtel of Leipzig, and Sieber of Paris—all issued the Concerto in parts. Though no precise dates can be established, it seeems possible that André’s was the first, because some errors in it are corrected by Breitkopf and by Sieber. It was in one of these houses that some forty passages of the solo part which had lain in, or impinged upon, the lowest range of the basset clarinet, were revised upwards to suit the limits of the conventional instrument. (The same, to a lesser extent, applies to the Quintet.)

Such, in outline, is the complex early history of the basset clarinet, its relation to Stadler and the origin of Mozart’s two compositions. For almost a century-and-a-half after their first publication, all performances used material derived solely from the very early editions. But from the late 1940s onwards, scholars and performers in various countries began to suspect that the accepted Concerto part, in particular, was corrupt. Documentary proof, however, was not forthcoming until 1967 when Ernst Hess, a Swiss composer and musicologist, discovered an anonymous review of the Breitkopf parts in the Allgemeine Musikalische Zeitung for March 1802. It was clear that the reviewer must have had to hand a manuscript score of Mozart’s basset clarinet text because he quoted from it and remarked how radically the parts had been altered in the Breitkopf edition.

The present recording is the first pairing of both Quintet and Concerto in which the solo part is played on a basset clarinet. For the Concerto, Thea King has followed the restoration of the basset clarinet version by the distinguished English clarinettist Alan Hacker, modifying it in several passages. For the Quintet she has adopted most of the suggestions given in the foreword to the Bärenreiter score for restoring the basset clarinet text. Her instrument was made by Selmer of Paris.

Although Mozart wrote the Concerto nearly two years after the Quintet, the similarities are greater than the differences, which are of degree and form rather than spirit. The two works may perhaps be likened to the obverse and reverse of a perfectly designed and finely minted coin, each harmoniously reflecting complementary but subtly contrasting aspects of its creator’s imagination. Much of the melodic line is notable for its distinctive, smooth, flowing limpidity, especially in the first movements of each work and the Rondo of the Concerto. As this is a feature of other Mozart works in A major—the two Piano Concertos K414 and K488, for instance, and the String Quartet K464—it cannot be due solely to the clarinet’s pitch but rather to some emotional association of the key itself. Both slow movements are instinct with the rapturous serenity and purity which mark Mozart’s style at this time. They are cast in the same mould as the music of the Three Boys in Die Zauberflöte and the slow movement of the last String Quintet (K614), to give only two instances.

In the first movement of the Clarinet Quintet Mozart sometimes treats the clarinet and its supporters in a concertante manner, while in the Concerto, particularly in the development sections of the outer movements, it has a more integrated role. Despite the disparity of the forces—four strings compared with an orchestra of strings, two flutes, two bassoons and two horns—Mozart contrives to write passages in both compositions which share the same sinewy texture and urgent rhythmical momentum: great strength underlies the mellow lyrical warmth. The two works show clearly the contrast in Mozart’s style of writing for this new clarinet. In the Quintet he uses more of its higher register, while in the Concerto he exploits the diversity of its full range and timbre. Indeed, the lower extension of the notes in the basset register enriches and darkens much of the tonal spectrum.

Although so much information has been gleaned recently about the Concerto, soloists have been very cautious about altering anything in the printed copy normally used, unless they possessed a basset clarinet. Nevertheless there is one bar, near the end of the first movement, which is an exception—a bubbling arpeggio accompaniment using, ideally, the lowest octave of the basset clarinet. Most editions originally relocated this in the middle register, requiring a repeat of the previous bar—technically relatively awkward and untypical of Mozart—so players have often dared to transpose all, or half, of it up an octave, or even omitted it. This bar was a vital clue in surmising that Stadler’s instrument had three comfortable octaves of C major, and the coincidence that it is bar number 333 tempts speculation that the Concerto, written in the same year as Die Zauberflöte, could also have had masonic allusions.

A trio of basset horns (in F) had appeared in the Masonic Funeral Music, K477, and on their own in the Divertimento, K229. Stadler’s own works for the same combination feature a solemn thrice-repeated (written) C, using all three registers. Could there have been a subconscious, or deliberate, connection between the downward-extended clarinet and masonic music-making?

Quite soon after the clarinet’s first entry the ‘new’ low notes are heard, prominent because of the leap down from the upper register to bottom E–D–C sharp; elsewhere, three repeated low notes are a special feature. Throughout the work there are many figures that repeat three times to build a phrase, and the natural three-octave range makes possible an exciting cumulative effect in the Rondo’s coda, for example. Less subtle instances are the scoring for three pairs of wind instruments, the key signature of three sharps, the three staccato notes that dominate the Rondo’s theme, and the three-cell shape of the Adagio tune, two short phrases and a longer one.

It would be quite easy to imagine that, whatever the fortunes of Freemasonry might have been, Mozart and Stadler could have enjoyed some brotherly gestures.