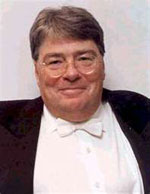 Jeffrey Tate was educated at Farnham Grammar School, where he already showed precocious musical aptitude, and then at Christ’s College, Cambridge, where he read medicine. He qualified as a doctor but abandoned a clinical career for music, entering the London Opera Centre as a student répétiteur in 1969. The following year he joined the music staff of the Royal Opera Company, Covent Garden, as a répétiteur. During his time at Covent Garden he worked with numerous distinguished conductors and was invited by Pierre Boulez to assist him on the centenary production of Wagner’s 'Ring' cycle at the Bayreuth Festival. He made his conducting debut in 1978, and during the following year substituted for James Levine at short notice to conduct Lulu at the Metropolitan Opera, to great critical and public acclaim: thus his international career as a conductor was effectively launched. In 1998 Tate took up the post of principal guest conductor of the Orchestra Sinfonica Nazionale della RAI, the principal Italian radio orchestra, and commenced an especially fruitful period of activity in Italy, at the same time becoming active in the opera houses.

Jeffrey Tate was born with the condition of spina bifida, which makes his extraordinarily successful career even more astounding. As he himself has commented in interview, ‘If people had told me that I would have the stamina to conduct 'Ring' cycles, I would have been amazed … I still am.’ As a conductor, he is very much the musician’s musician. Gifted with a natural sense of expressive gesture and an inexhaustible love of music, his performances are characterised by an ideal balance between respect for the composer’s wishes and a deeply felt personal response. Tate holds those of Commander of the British Empire and the Chevalier de l’Ordre des Arts et des Lettres of France.