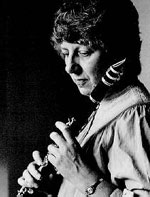 see also Dame Thea King (clarinet)
The doyenne of English clarinettists, Dame Thea King was a greatly loved and respected artist who enjoyed a varied career as soloist, chamber musician, orchestral player and teacher. She appeared at all the major festivals in Britain, and also in Europe, Hong Kong, Japan, Brazil and the USA, frequently as soloist with the English Chamber Orchestra for whom she played principal clarinet.

Her solo recordings feature nineteenth-century repertoire and British music of this century (many were première recordings), including a recent issue of Britten's posthumously-published Concerto Movement, together with concertos by Malcolm Arnold and Elizabeth Maconchy. Her versions of Mozart and Brahms have often been the preferred choice of critics in both broadcast and magazine reviews.

Thea King also played the solo repertoire for basset clarinet and basset horn, and recorded all three parts in Mendelssohn's Konzertstück, Op 114, for clarinet, basset-horn and piano for the BBC's 'Double Exposure' series.

She was a professor at the Guildhall School of Music, and was created a Dame of the British Empire in 2001, having earlier been awarded the OBE in 1985.