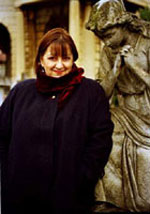 born: 21 June 1952
country: United Kingdom
Judith Bingham was born in Nottingham in 1952, entering the Royal Academy of Music in 1970 to study composition and singing. At the Academy her teachers were Alan Bush and Eric Fenby. She later undertook further vocal studies with Eric Vietheer and composition with Hans Keller, who exerted a strong influence upon her development. She won the BBC Young Composer Award in 1977. In the years following her graduation from the Royal Academy she pursued her singing career (notably with The BBC Singers between 1983 and 1996), as well as undertaking composition work. Much of her composition output began in the late 1980s. Her work includes Chartres (1988) for orchestra, Passagio—Bassoon Concerto (1998), The Shooting Star (a trumpet concerto, 1998–9), Prague (1991) and The Stars above, the Earth below (1991) for brass band. Since writing these pieces she has undertaken many important commissions and now has a substantial portfolio of works written for voices, including some for liturgical use. She is now one of the most sought-after contemporary British composers.