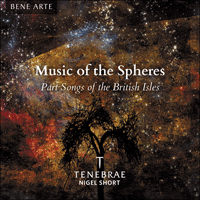 Music of the Spheres

Part Songs of the British Isles

A warmly recorded feast of choral music from the expert singers of Tenebrae. Nigel Short has devised a fascinating programme which seamlessly guides us from Elgar and Bridge, via Stanford and Vaughan Williams, to Bingham and Chilcott, taking in some welcome rarities along the way.

Herbert Murrill Two Shakespeare Songs
Herbert Murrill (1909-1952) fits the quintessential image of a British organist-composer with another ‘proper job’ in education and broadcasting. Following his time at Oxford he held a succession of London organist posts, became a professor of composition at the RAM in his early twenties and rose to head of music at the BBC in 1936. His formation was conservative—but he strayed from a predictable course with commissions for incidental music for film documentaries and for the Group Theatre Company. It is now known that he served in the war effort as a sergeant at Bletchley Park where his musical skills were additionally put to good use.

The two settings: O mistress mine and Come away, death are from Twelfth Night, the former being words of Feste, the jester. The normality of O mistress mine echoes the conventions of Gerald Finzi. The final cadence has a remarkable eyebrowraiser for the upper sopranos, just when all seemed plain sailing, whereas the harmonic language of Come away, death comes as quite a surprise. Whilst Murrill shares a free, homophonic word-setting with many of this era, where the speech-flow has an effortless precedence over the tyrannies of conventional bar-groupings, the slightly tortuous chromatic lines tend towards the multi-tonal. Moments such as a somewhat stunning ‘Weep’ at the close of Come away, death possess a Gallic richesse and there is a hint of a Walton-esque blues flavour in this example.

Frank Bridge Autumn
Autumn, composed in 1903, sets words by Shelley and is in essence a dirge for the passing of summer and nature’s blossoming. Frank Bridge is remembered largely through his most successful student, Benjamin Britten, although he did not have a great following as a teacher of composition. Certainly his style was quintessentially English-retrospective and an attempt at richer and later, more ambitious techniques appears to have gained little attention.

Frank Bridge The bee
The bee is a fanciful scherzo, complete with buzzing effects. But the keen ear might detect in this miniature inspiration for Britten’s Ballad of Green Broom.

Ralph Vaughan Williams Three Shakespeare Songs
Ralph Vaughan Williams composed these choral essays, somewhat reluctantly, as test pieces for the 1951 National Competition Festival of the British Federation of Music. Since then they have become a firm favourite as they combine a world of impressionism (from his experience with Ravel) with a journey through enharmonic wonders, and tongue-tying tricks of choral enunciation.

Full fathom five is a play on the sound of tolling bells, in multi-divided upper voices while the basses sing an undulating melody beneath. There is a little quirk though. If one takes the first four notes of either ‘O taste and see’ or the hymn tune: ‘For all the saints’ by the same composer, and sings them simultaneously, the result is the cluster-chord on ‘Ding’. The tenors, on ‘Dong’, then provide that clanging dissonance which employs the same interval inherent in bell overtones. A central, contrasting section is classic Vaughan Williams: parallel triads which transform, punning beautifully with the text, into the strangest superimposition of chords on ‘strange’.

The cloud-capp’d towers is a masterful test-piece for choirs to prove their collective tuning skills, but has also become a favourite for its ravishing colour-changes reminiscent of progressions in his 6th Symphony.

Over hill, over dale is in essence a Scherzo, with some similarities to the choral-scherzo (third movement) of his Sea Symphony. The keen listener might recognise the same interval-span on ‘hill’ and ‘dale’ as was used in the tolling-bell-effect in the first song.

There is sweet music (text by Tennyson) is an ambitious experiment in bi-tonality, the women’s voices singing in A flat while the lower voices answer in G major. Clearly intended to be a demanding competition piece, in this case it was for Elgar’s friend, Canon Gorton and the 1909 Morecambe Festival.

Deep in my soul (Byron), while restricting itself to the same key for all the singers, travels far and wide through keys. There is perhaps a love interest in the composer’s mind, the dedicatee having been an American acquaintance, Julia Worthington, known in Elgar’s circles as ‘Pippa’. Written at the behest of Dr W G McNaught, with whom Elgar acted as an adjudicator at the Morecambe Festival.

O Wild, West Wind was given its premier there in 1909. Written in the same period as the First Symphony, it reveals its origins in the complexity of its writing, replete with ambitious key-modulations.

Owls has some hint of the inner mysteries of the Enigma Variations. There is an emptiness and lack of any resolution which Elgar refused to explain, even to his friend, Jaeger.

Ernest Walker Soft music
Ernest Walker had a lifelong association with Oxford where he studied and later became Director of Music of Balliol College and whose pupils included William Walton, Charles Groves and Herbert Murrill. His Soft music, for six-part choir SSATBB reflects his apparent leaning towards the mystical in nature, and the brief text by the poet, Robert Herrick (1591-1674) suits his own simple, syllabic style, featuring seemingly elementary scales in thirds, unexpectedly thrown off course by chromatic and enharmonic shifts in a vivid illumination of the words.

Judith Bingham The drowned lovers
Both words and music were written by Judith Bingham inspired by a swim in a Bavarian lake and was intended to be a partner work for The blue bird by Stanford. Judith has spent much of her musical life with feet in two camps, as singer and composer. Many of her influences are not simply from the abstract but are enriched from nature and from the realm of ideas and from other art forms. The drowned lovers is scored for mezzo solo and eight-part chorus.

Sir Charles Villiers Stanford The blue bird Op 119
This tender and exquisite setting of words by Mary Coleridge is in no sense the typical Stanford of routine, choral fare. The serenity of the picture painted owes something to the unorthodox use of unresolved, secondary seventh chords—the piece tapers away on one—and a judicious and apparently timeless technique of hanging, lengthy notes which allow no ripples on the surface of this particular lake. It might just be deliberate on the composer’s part, but as often as not the top line and the bass part move in contrary motion. Is this perhaps the bluebird’s reflected view from above the still water?

Sir Charles Villiers Stanford On Time Op 142
Written in 1914 to celebrate the jubilee of the conductor of the Bristol Madrigal Society, Daniel Wilberforce Rootham, this opus 142 setting is an exhortation by Milton (c.1563-1647) for Time itself to fly on its way. Milton himself was no stranger to thinking on higher things and, while on the face of it this text makes no reference to the Divine, it clearly implies that Man has the promise of eternal life and should be joyful about it. The choral format seems perfect for stereo recording, long before its birth, and the finely crafted writing throws in some surprises such as some sudden modulations and a striking flattened-ninth chord on ‘consum’d’.

Jonathan Harvey Song of June
Jonathan Harvey was described by fellow-composer, Michael Berkeley as wearing two hats: the predictable type of English, establishment composer, whose face fitted with, for example, that world in which his own son entered as a chorister at Winchester Cathedral, and also a rather unconventional world of the experimental sounds of electronics-plus-speech. Song of June is a setting of Wilfred Owen’s 1914 poem about youth and freedom and it exudes spiritual dimensions of light and love, using contrapuntal techniques, in a vocally wispy treatment, using tintinnabulation, drones and repeated speech-effects.

Bob Chilcott The Modern Man I sing
This is one of Chilcott’s earliest choral successes after his time in the Kings Singers and as an orchestrator, written for the leading Lutheran Gustavus Choir (Minnesota).

The runner employs ‘cross-handed’ rhythmic vocalization and canonic ‘chasing’ to suggest the pumping limbs of the runner, use of panting effects and even the fugal technique of stretto, where thematic material is superimposed closer in time to give an accelerating effect.

The last invocation is a tender song which, in a similar vein to Vaughan Williams, uses a bell-like accompaniment, but in this case upwards from the bass, matched to a wide-open-space melody on top—consciously American?

One’s-self I sing is a paean of ostinatos, starting gruffly in the basses but becoming increasingly rhythmically complex. The tenors own the melody and the women’s voices provide little fanfares on top, the whole effect reminiscent of William Walton’s Cantico del Sole, in an athletic, Choral-Concerto mode.

When I began looking into this particular field of repertoire I was rather taken aback and delighted by the sheer volume and range of material that I’d never come across before! A seemingly inexhaustible supply of beautiful part songs and settings meant that many of my personal favourites I’d originally earmarked for this recording had to be put to one side. As with other Tenebrae recordings on the Bene Arte label I’ve aimed to strike a balance between well-known works and some lesser-known gems, old and new, that deserve to be up in lights.

I received a huge amount of help in my research from our generous benefactor Richard Baker, himself a former chorister and choral scholar from King’s College, Cambridge, who has vast personal experience of performing many of the works included here. It was Richard who introduced me to the two Shakespeare settings by Herbert Murrill. Most choral singers will have come across Murrill’s setting of the Canticles in E major and, like me, may not be aware of any other output from him. These pieces are exquisite and Murrill’s skill in balancing wide-spread chords so that every note adds to the richness can’t be applauded enough and deserve to be included in any programme of music from this era! There are works from more recent times including Bob Chilcott’s The Modern Man I sing, a fun and energetic setting of three poems taken from Walt Whitman’s collection ‘Leaves of Grass’ (the only non-British texts on this disc). Also recorded here is the heart wrenching The drowned lovers by Judith Bingham that was conceived to segue into Stanford’s iconic setting of Mary Elizabeth Coleridge’s poem The blue bird. If this doesn’t bring a tear to your eye then nothing will!

Thank you as always go to our wonderful team of Tenebrae singers and to Richard Baker, whose generosity made this recording possible.