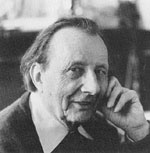 born: 12 May 1903
died: 26 December 1989
country: United Kingdom
Sir Lennox Berkeley came from the same generation of British composers as Walton and Tippett but it was his connections with France that gave him such a distinctive personality. His ancestry was partly French, family connections were retained and, when he wanted to study composition after leaving Oxford in 1926, he started a long apprenticeship with Nadia Boulanger and became her most distinguished British pupil. Possibly under her influence he became a Roman Catholic in 1928 and some of his most profound works are on religious subjects. Berkeley admired Ravel and Poulenc, who were both personal friends, but above all he revered Mozart, Chopin and neo-classical Stravinsky.

Berkeley’s most influential British connection was his personal and professional relationship with Benjamin Britten. They first met when they were both having work performed in the International Festival of Contemporary Music held at Barcelona in 1936. It was a shattering experience for Berkeley to meet another British composer, ten years younger, who possessed such remarkable gifts. Britten seemed to know everything Berkeley had been trying to learn during the last decade in Paris. Their approach to composition was so similar they immediately collaborated on an orchestral suite, Mont Juic, based on popular tunes they heard in Barcelona and, for many years, nobody knew which composer wrote which of the four movements.

After his meeting with Britten, Berkeley had something to set against the domineering mother-figure of Nadia Boulanger. He reached his maturity at the end of the 1930’s, under the shadow of war, with outstanding orchestral works such as the Serenade for Strings, Symphony No. 1, and the Divertimento in Bb. By the late 1940s Berkeley’s now very personal style was brilliantly expressed in the Piano Sonata and the concertos for solo piano and for two pianos – arguably the finest British piano music of the century. The vocal counterpart of these works came with the deeply moving Four Poems of St. Teresa of Avila, so memorably sung by Kathleen Ferrier, and the Stabat Mater.

In the 1950s Berkeley boldly followed Britten into the theatre with the grand opera, Nelson, and the one-act comedy, A Dinner Engagement, both premiered in 1954 and the biblical Ruth two years later. By now Berkeley was totally independent of his earlier influences and had created an impressive synthesis capable of extension into a modified serial technique in the 1960s.

All these elements contribute in different ways to the success of Berkeley’s chamber music. The three String Quartets make an imposing contribution along with sonatas, or sonatinas, for several solo instruments with piano, the String Trio, the Horn Trio, and many more.