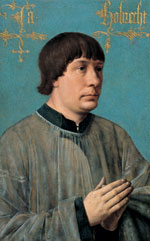 born: 1457/8
died: 1505
country: Netherlands
Jacob Obrecht (1457/8–1505) was born in Ghent and died in Ferrara. If the place of death suggests that he was yet another Franco-Flemish composer who received his training in the Low Countries and made his living in Italy, this is inaccurate. For although Obrecht was probably the most admired living composer alongside Josquin des Prés, he consistently failed to find employment in the Italian Renaissance courts. The reason for this may have been that he could not sing well enough: musicians at that time were primarily required to perform, to which composing took second place. Instead he was engaged by churches in his native land – in Utrecht, Bergen op Zoom, Cambrai, Bruges and Antwerp – before he finally decided in 1504 to take the risk and go to the d’Este court in Ferrara. Within a few months of arriving there he had contracted the plague. He died as the leading representative of Northern polyphonic style. 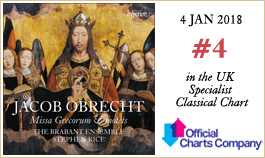