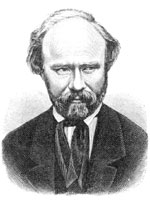 born: 1813
died: 1863
country: Germany
Friedrich Hebbel, famed for his historical and biblical dramas, was one of the most distinguished literary men of his day. His work was of constant interest to Schumann—although there was no real friendship between the two men. We know that Schumann read Hebbel’s Judith, Maria Magdalene (a ‘tragedy of common life’ which depicts the lower middle-class milieu from which the poet sprang), the comedy Der Diamant, and the tragedy Agnes Bernauer. Of greatest interest however was Hebbel’s Genoveva, written in 1840, which was the basis for Schumann’s opera of the same name (his only attempt in this genre) which was composed between 1847 and 1848. Clara Schumann visited Hebbel in Vienna in January 1856 and was struck by his stiffness and coldness. Perhaps he disapproved of Schumann’s opera. Hebbel’s study of Hegel’s concepts of history were an important part of his modernising effect on German literature, and his explorations of the Siegfried myth were of significance to Wagner.