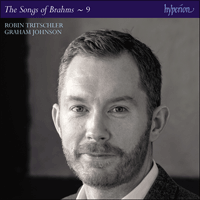 The heady, youthful tenor of Robin Tritschler is our guide through more of those musical riches which constitute Brahms’s complete song output. Volume 9 is a rewarding journey spanning more than three decades of the composer’s creative life.

‘The mood is predominantly reflective, gently folkish and naive throughout, which proves a good match for Tritschler’s youthful, firm tenor and bright, straightforward interpretations. He captures beautifully the artlessness of the early ‘Mondnacht’ and the urgency of ‘In der Fremde’ … he's superb in the folk songs themselves, as well as such irresistible folky numbers as ‘Sonntag’ … with the usual high-quality documentation and engineering, this is an excellent addition to this series, and one that amply demonstrates what a superb Lieder singer Tritschler is’ (Gramophone)
‘Tritschler's fresh, beautifully focused tenor is an expressive joy here, and Johnson's liner notes are, as ever, as enjoyable and as immersive as his playing’ (BBC Record Review)
‘With singing of such distinction as we encounter here, even the more obscure songs come to life, and Graham Johnson’s accompaniments further heighten the listening experience … if I add that reading Graham’s all-embracing notes on each of the songs further enhances the value of this issue, there is no need for me to apologize for the Recommended tag’ (MusicWeb International)
‘A selection that focuses on the lyrical and folk-like, thus playing to several of Robin Tritschler’s particular strengths, not least a certain fresh directness of interpretation, if interpretation is the word for such unmannered and non-interventionist singing. Much is achieved though Tritschler’s care for line and tone and word-meaning, without seeming on first hearing to do much more than deliver what is written. But this is an art that conceals art, and this particular selection of items is supremely well served by it. Of course he is blessed with the most appealing vocal charm, instantly recognisable, and an instinctive feeling for style. But here the honey-toned Irish troubadour comes of age as a great lieder singer … very highly recommended. After six years or so of reviewing for this site, I have yet to suggest an unassailable personal ‘record of the year’ for MusicWeb’s annual listing. Now I have one before May is out’ (MusicWeb International)» More
‘Master accompanist Graham Johnson's ongoing exploration of the piano-accompanied songs of Brahms is a godsend. You may think the same thing about sweet-voiced Irish tenor Robin Tritschler once you've heard his deeply felt, sensitive treatment of the opening song … in the songs that show him at his best on this perfectly balanced recording, Tritschler is a gift’ (Stereophile)

This album is the ninth in a series that presents the entire piano-accompanied songs of Johannes Brahms. As such it is a companion to the series undertaken by Hyperion for the songs of Schubert, Schumann, Fauré and Strauss.

Brahms, like Schumann, but unlike Schubert with his much greater output, issued the majority of his songs in opus number groupings. There is a tendency in modern scholarship to suggest that he envisaged, or at least hoped for, performances of his songs in their original opus number groupings. Of course, one cannot deny that some planning (though of a rather variable kind) went into the arrangement of these song bouquets (the composer’s own expression) for publication. Good order and cohesion in printed form (as in an anthology where poems are arranged to be discovered by the reader in a certain sequence) do not automatically transfer to the world of the recital platform where one encounters a host of different practical problems, casting (male or female singer) and key-sequences (high or low voice) among them.

Each disc of the Hyperion edition takes a journey through the career of Johannes Brahms. The songs are not quite sung in strict chronological sequence (Brahms had a way of including earlier songs in later opus numbers) but they do appear here more or less in the order that the songs were presented to the world. Each recital represents a different journey through the repertoire (and thus through Brahms’s life).

We can imagine certain (but by no means all) of these groups of songs grouped and published together for various reasons, but it is quite unclear whether Brahms was making a point thereby. Far from dreaming of complete evenings of his songs in public performance, he preferred to hear no more than three of his own songs in any one concert. This astonishing information comes from an invaluable book of essays: K Hamilton and N Loges, eds: Brahms in the Home and the Concert Hall. Between Private and Public Performance (Cambridge: CUP). The conventions of music in the home, where so many songs were first heard and discussed in an environment of lively and cultivated enthusiasm, did not include listeners buckling down in respectful silence to a substantial sequence of songs, as if they were at a public concert. Brahms seems to have been happiest hearing his songs as Hausmusik and surrounded by supportive informality—and I dare say Schubert would have said the same about the Schubertiads. The present-day hunger for cycles, hidden, implicit, unknown or concealed, seeks to feed the appetite for a kind of recital format that is favoured, perhaps over-favoured, in the twenty-first century, but was almost unknown in the nineteenth.