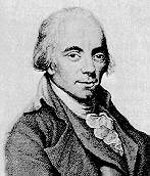 born: 23 January 1752
died: 10 March 1832
country: United Kingdom
Muzio Clementi (1752–1832) was born into a family of modest means in Rome. When he was fourteen years of age, a visiting Englishman returning from his ‘grand tour’, Sir Peter Beckford, cousin of the novelist William Beckford, took young Clementi with him back to his country estate in Dorset. (Beckford later explained that he had ‘bought him from his father for seven years’.) In this rather isolated place, just north of Blandford Forum, Clementi became a kind of one-person musical establishment. He performed for Beckford’s guests, began to compose, and spent long hours refining the keyboard technique that was one day to be legendary. When the seven years were up he moved to London, which was to be his home base essentially for the rest of his life. He presently became an accompanist at the King’s Theatre, began to publish his earliest keyboard music, and prepared for European tours that occupied most of the years 1780–85. In Paris he apparently played for Queen Marie Antoinette, and in Vienna he and Mozart engaged in a famous ‘piano contest’ staged by the Emperor Joseph II for the entertainment of his guests. Thereafter Clementi spent some months teaching in Lyon, where his attempted elopement with a piano student ended unhappily: the highly placed father put a stop to such an undesirable marriage and Clementi became something of an object lesson in the lowly status of musicians in respectable late eighteenth-century European society.

From 1785 to 1802 Clementi remained in London, participating in the most robust musical life of any city in the world. In 1791 the London Morning Chronicle exclaimed:

So many public Concerts, private Concerts, Operas, Balls, and Music Meetings, as are cut out for the Winter, and such a shoal of eminent performers as are imported from the Continent, will render a motto from Shakespeare’s Tempest highly appropriate to this country:

The Isle is full of noises,
Sounds and sweet airs, that give delight and hurt not.
Sometimes a thousand twangling instruments
Will hum about mine ears.

In the midst of this great crescendo of musical activity Clementi reached the apogee of his career, first as a performer, then as a composer. The only major obstacle to his burgeoning fame was one of that ‘shoal of eminent performers from the Continent’, Joseph Haydn, present in the city in 1791–2 and 1794–5; Londoners consistently preferred him to any local talent. And the comparison with Clementi was not hard to make, as the principal fare offered by both composers at London concerts consisted mainly of symphonies. (Only two of Clementi’s symphonies from this period, published in 1787 as Op 18, have survived.) Until 1790 Clementi also appeared frequently on the London stage as a piano soloist, performing his own sonatas and concertos. Here is a fairly typical review from the Morning Chronicle of 15 February 1790:

But the performance beyond all others to astonish, was Clementi’s concerto on the Piano Forte: what brilliancy of finger, and wonderful execution! The powers of the instrument were never called forth with superior skill, perhaps not equal.