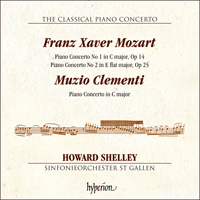 Franz Xaver Mozart was born just four months before the death of his father, Wolfgang Amadeus. A pianist of similarly precocious talent, he nevertheless wrote just two piano concertos: coupled with Clementi’s only surviving essay in the genre, they make a sparkling addition to our Classical Piano Concerto series.

PRESTO CLASSICAL DISC OF THE WEEK

‘[Shelley] brings a real poignancy to the halting, minor-key slow movement, while the finale is brought to life with an unobtrusive felicity … a compelling addition to Hyperion’s catalogue’ (Gramophone)
‘Howard Shelley plays both pieces quite beautifully, investing each phrase with subtly understated expression’ (BBC Music Magazine)» More

‘Longstanding Hyperion Artist Howard Shelley rattles off these concertos as if to the manner born’ (Classic FM)» More
‘The Piano Concerto in E Flat … is the real thing, taking the listener on an unpredictable musical and emotional journey. Howard Shelley is the adept pianist, routinely accompanied by the Sinfonieorchester St Gallen. They throw in a naïve, galant concerto by Clementi for good measure’ (Financial Times)» More

Constanze Mozart expected great things from her younger surviving son, Franz Xaver Wolfgang. Court Kapellmeister Antonio Salieri prophesied, optimistically as it turned out, that he would make a career ‘not inferior to that of his celebrated father’. Born just four months before Wolfgang’s death, Franz Xaver showed precocious talent as a pianist, and as a boy was taught by, inter alia, Salieri (ironically, given the baseless posthumous rumours that grew up around the Italian) and Hummel, who as a Wunderkind had once been a pupil of Wolfgang’s. In 1805, aged fourteen, he gave his public debut in Emanuel Schikaneder’s Theater auf der Wieden. Three years later he escaped from the inevitable scrutiny of the Viennese to the provincial obscurity of Galicia, where he initially served as music teacher to Count Viktor Baworowski.

Innately restless (a chip off the old block there), Franz Xaver then moved to a Polish patron, Count Janiszewski, before settling in Lemberg (present-day Lviv) as a freelance musician. His prime source of income seems to have been as piano teacher to Julie Baroni-Cavalcabó, the teenaged daughter of an elderly government official whose much younger wife, Josephine, became Franz Xaver’s longstanding mistress. He even moved in with Josephine and her husband to create an eyebrow-raising ménage à trois, to the discomfiture of his mother Constanze.

Trading under the name ‘W A Mozart Jr’ (his mother always called him Wolfgang), Franz Xaver emulated his father by undertaking a series of concert tours. Between 1819 and 1821 he performed in cities including Warsaw, Copenhagen (where Constanze was now living with her second husband, Georg Nissen), Berlin, Leipzig, Dresden, Prague, Vienna and Milan, where he saw his elder brother Carl, an official in the service of the Viceroy of Naples. But despite the Mozart moniker, and his attested virtuoso panache, his tours were only a modest commercial success. Franz Xaver returned to his teaching, and his ménage, in Lemberg, made an extended visit to Salzburg in 1829, and finally, in 1838, moved to Vienna. On a last visit to Salzburg, in 1842, he played his father’s by-then famous D minor Concerto, K466, at celebrations to mark the unveiling of the city’s Mozart memorial.

Researching for a Mozart biography with her husband Vincent in 1829, Mary Novello met Franz Xaver at his mother’s Salzburg home, and found him burdened (and who wouldn’t be?) by the impossibility of living up to his father: ‘This feeling may cast a shade over his countenance rendering it rather heavy, and damps the ardour of his musical works reducing them to mediocrity; something of this despair of effecting anything worthy of his father’s name seemed to hang over him, otherwise he appeared goodnatured, modest, easy of access and frank’—though Mary and Vincent later found that ‘he improves much on acquaintance’.

History tends to have sided with Novello and pushed Franz Xaver to the margins. His compositions—mostly solo piano works (including a variation for Anton Diabelli’s collaborative project), songs and chamber music—are rarely aired today. Yet while it would be disingenuous to claim them as unheralded masterpieces, his two piano concertos are sparkling, finely crafted works that owe much to Wolfgang’s Viennese concertos.

The debt is especially evident in the Piano Concerto in C major, Op 14, composed in 1809, when Franz Xaver was just eighteen, and scored for a full Classical orchestra minus clarinets. Indeed, in their themes and their brilliant yet crystalline keyboard figuration—reminiscent of the C major concertos, K467 and K503—the outer movements are so ‘Mozartian’ as to sound almost like pastiche. Like his father, Franz Xaver works with a profusion of lyrical themes, though his structures are looser, with the emphasis on bravura display and virtually no thematic development. In the march-like Allegro maestoso a tune near the end of the opening tutti quotes a rustic gavotte melody from the finale of Wolfgang’s D major Violin Concerto, K218—a deliberate tribute, perhaps. Moments of piano–wind dialogue recall his father’s Viennese concertos, as does the ploy of repeating the closing phrase of the exposition in the minor key at the start of the central solo section (compare, say, K482 or the ‘Coronation’ Concerto, K537). But there is no Mozartian concerto precedent for the new dolce theme which emerges out of the blue towards the end of the movement.

For his slow movement Franz Xaver writes a set of variations on a melancholy A minor theme, announced by low-pitched strings, then elaborated and ‘romanticized’ by the piano. The third variation turns to a warmly coloured A major (more piano–wind dialoguing here), while the final variation, initially for orchestra alone, showcases a solo bassoon. Wolfgang often ended his concertos with a jig-like 6/8 rondo. Franz Xaver follows suit, though the tempo (Allegretto) is more restrained than in ostensibly similar finales by his father. The upshot is a graceful, airy frolic, with a strong family likeness between its themes, and a deft sideslip from C minor to a distant A major in the central episode—a moment of which Wolfgang would surely have approved.

Dating from 1818, after his move to Lemberg, Franz Xaver’s Piano Concerto in E flat major, Op 25, was doubtless intended for his forthcoming concert tours. While his father’s spirit still hovers over the work, the rich and intricate piano figuration owes more to his erstwhile teacher Hummel and his cousin Carl Maria von Weber. Wolfgang had given his E flat major Concerto, K482, a special tinta by replacing oboes with the softer, more sensuous clarinets. Franz Xaver does likewise, exploiting the velvety sonority of clarinets plus bassoons in the opening tutti and, later, the clarinet’s potential for tender cantabile. Both the wide-leaping main theme and its subsequent treatment in invertible counterpoint recall Wolfgang’s ‘Haffner’ Symphony. Amid the elaborate bravura passagework, a lavish array of solo melodies includes a theme in the dusky key of G flat major and a dulcet tune proposed by the soloist and repeated on the clarinet. In the central section the piano introduces yet another lyrical melody before embarking on a brilliant toccata-cum-fantasia, lightly accompanied by the orchestra.

Delicately scored for clarinets, bassoons and strings (with horns entering softly in the final bars), the brief C minor Andante espressivo sounds like a homage to the Andantino in Wolfgang’s first great piano concerto, K271. Although the keyboard ornamentation is of a later age, the music has a similar speaking eloquence, with its halting, sighing phrases and its mingling of recitative and bel canto aria. The movement ends inconclusively on a chord of G major, the dominant of C minor, giving a fleeting ambiguity to the unharmonized Gs that open the rondo finale. Like Wolfgang’s K503 and K537, this is written against the background of a gavotte, though the frisky dotted rhythms and reams of cavorting sextuplets leave the aristocratic dance far behind.

One of the most versatile and successful musicians of the age, Muzio Clementi was born in Rome in 1752, the eldest son of a silversmith and his German wife, and was ‘discovered’ and brought to England in 1767 by the wealthy English MP Sir Peter Beckford. (Beckford later explained that he had ‘bought him from his father for seven years’.) After studying in virtual isolation on Beckford’s estate near Blandford in Dorset, Clementi moved to London around 1774. In the capital he gradually made his reputation as a composer and keyboard virtuoso, then, from the 1790s, as a teacher (Ignaz Moscheles and the Irishman John Field were among his students), music publisher and piano manufacturer.

Visiting Vienna in December 1781, during the first of his Continental tours, Clementi took part in the famous piano duel with Mozart staged by Emperor Joseph II. The contest ended without obvious victor or vanquished, even if the Emperor later declared that Mozart had displayed superior taste and refinement. Never one to go overboard about fellow musicians, Italians especially, Mozart delivered a withering verdict to his father: ‘Clementi plays well, as far as execution with the right hand is concerned. His greatest strength lies in his passages in thirds. Apart from that he has not a kreutzer’s worth of taste or feeling—in short, he is a mere mechanicus.’ Mozart’s distaste for Clementi’s playing didn’t stop him from pilfering a tune from a keyboard sonata (Op 24 No 2) for the overture to Die Zauberflöte. Clementi’s verdict on Mozart was rather more generous; and his admiration is attested by the numerous piano transcriptions he made of Mozart’s music, including, ironically, the Zauberflöte overture.

Clementi apparently composed several concertos, all lost, for use on his European concert tours of the early 1780s. His sole surviving work in the genre, the Piano Concerto in C major, probably dates from the late 1780s, when as ‘principal composer and performer’ of the Hanover Square Grand Professional Concerts in London he frequently played and conducted his own works. This has come down to us only in a manuscript copy of 1796 made by the composer (mainly of Singspiele) and teacher Johann Baptist Schenk, who in 1793 helped the young Beethoven with his counterpoint studies. To maximize sales, Clementi subsequently transcribed the concerto as a solo keyboard sonata, published in 1794 as Op 33 No 3. (Without conclusive evidence either way, some scholars have maintained that the concerto was an arrangement of the sonata, not vice versa.)

Slighter in scale and manner than Franz Xaver’s concertos, Clementi’s concerto is scored for oboes, bassoons, horns, trumpets, timpani and strings. The first movement (Allegro con spirito) mingles pianistic virtuosity (including examples of the ‘passages in thirds’ grudgingly admired by Mozart) with a buffo exuberance that recalls Mozart’s early Salzburg concertos. Beginning like an opera overture, the racing opening tutti contains all the movement’s main material: a formal theme based on a rising scale, a slow-burn ‘Mannheim’ crescendo, and a more lyrical tune. When the keyboard enters it proceeds to reinterpret the tutti themes in pianistic terms, but introduces no new melody of its own—a far cry from the thematically lavish Mozarts, father and son.

The second movement, marked Adagio e cantabile con grand’ espressione, distils a mood of hushed solemnity that anticipates Beethoven’s early concerto slow movements. The piano takes up and decorates the simple theme announced by the orchestra, then subjects it to increasingly rapturous embellishment. Buffo merriment returns in the rollicking Presto finale, written, like so many Mozart and Haydn finales, in the style of a contredanse. Here the spirit seems distinctly Haydnesque, whether in the abrupt hiatus near the opening (with a gleeful sense of ‘fooled you!’), or the way the whole rondo evolves from a single, inventively varied theme.