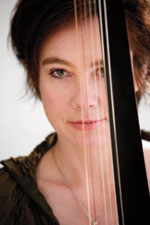 see also Elizabeth Kenny (theorbo)
Elizabeth Kenny has established herself as one of the UK’s foremost lute players. Her solo repertoire ranges from the renaissance to the eighteenth century, and she is in great demand as a continuo player with the leading period instrument ensembles (Orchestra of the Age of Enlightenment, Gabrieli Consort, Taverner Players etc.).

She has been a regular part of William Christie’s Les Art Florissants since 1993. With these ensembles she has made dozens of recordings for CD, radio and television and toured throughout Europe, North America and Japan.

She plays chamber music with Monica Huggett’s The Greate Consort and with the viol consorts Concordia (UK) and L’Ensemble Orlando Gibbons (France). She has a special interest in the literature of the late sixteenth and early seventeenth centuries. With tenor Mark Padmore and the actress Josette Simon she developed a programme called Songs and Sonnets, performed for the first time in summer 2001.

Elizabeth Kenny studied with Nigel North. Robert Spencer and Pat O’Brien also gave her advice and inspiration. She is professor of lute at the Royal Academy of Music in London, where she advises on English song and French baroque repertoire.