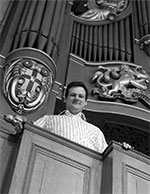 At the Temple Church, James presides over the famous four-manual Harrison & Harrison organ and directs the professional choir of men and boys about whom the Daily Telegraph commented, ‘The Temple Church Choir is a formidable force, finely honed and blended’. The choir’s latest CD was released on the Signum label in 2010. As an organist, he is known as much for his outstanding interpretation of the solo repertoire as for his colourful and inventive accompanying; he is one of England’s most sought-after young organists.

James Vivian was educated at King’s College, Cambridge where, for four years, he worked closely with its world-famous choir as organ scholar. Before Cambridge, he was acting-Assistant Organist of Lincoln Cathedral. He was a prize-winner in the Fellowship examination of the Royal College of Organists, and was awarded a scholarship tostudy the French organ repertoire with Marie-Louise Langlais in Paris.

James has appeared in many Festivals (including the BBC Proms, Aldeburgh, The Three Choirs Festival, the Lincoln Festival in New York City, and Festivals in Bermuda, Germany and Italy), and has played recitals and concerts throughout the world (including Japan, Brazil, South Africa,USA, and Europe). He has broadcast on many national radio stations as a soloist, and has recorded with labels such as Decca, Priory, Signum, Sony BMG, EMI and Hyperion. James has also been an examiner for the The Royal College of Organists.

James was Artistic Adviser to the hugely successful year-long 2008 Temple Festival; highlights included conducting a new and fully-staged production of Dido & Aeneas in London which was highly praised: ‘…an uncommonly satisfying, very beautifulaccount of Dido and Aeneas’ (Opera). He is co-founder of two professional instrumental ensembles, The Temple Players and Temple Brass, as well as the Temple Singers, with whom he presents concerts at the Temple Church.