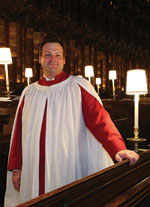 see also James Vivian (organ)
James Vivian is Director of Music at St George’s Chapel, Windsor Castle, a position he took up in September 2013. Prior to this he was a member of the Music Department of the Temple Church in London for seventeen years; under his direction the Choir recorded, broadcast, and performed in festivals such as Aldeburgh. He was educated at King’s College, Cambridge, where he held the prestigious Dr AH Mann Organ Scholarship and was a prize-winner in the Fellowship examination of the Royal College of Organists. As an organist and conductor, James has appeared in many festivals including the BBC Proms, Aldeburgh, the Three Choirs Festival, Choral at Cadogan, and the Lincoln Festival in New York City. He has worked with the BBC Singers, Holst Singers, Polyphony and the Aurora Orchestra, and has played recitals and concerts throughout the world (including Japan, Brazil, South Africa, USA, Bermuda and Europe). He has also been an examiner for the Royal College of Organists and Royal Academy of Music and has broadcast on many national radio stations as a soloist. James has recorded with labels such as Decca, Signum Classics, Priory, Sony BMG, EMI and Hyperion.