Grace specialises first and foremost in the performance and recording of Baroque music.

Grace grew up in a house whose hallway was entirely filled by a grand piano which was being stored for a friend of the family—music was physically unavoidable. She learned the piano and the violin but it was singing that she loved the most. Taken to Cats when she was three years old she sang along throughout or, rather, whenever her mother’s hand wasn’t clamped over her mouth. And it was her singing that won her a scholarship to the Royal Academy of Music where she won the Early Music prize. Since then she has worked as a soloist with leading Baroque ensembles, under the batons of Sir John Eliot Gardiner, Paul McCreesh, Philippe Herreweghe and Harry Christophers.

Her discography includes a decade of recordings with The Sixteen, many of which feature her as soloist—Handel’s Jeptha (as Angel), Dixit Dominus, Monteverdi’s Vespers of 1610, Pianto della Madonna, Acis & Galatea (as Galatea) and the Lutheran Masses of Bach. On BBC Radio 3’s Building a Library, her singing in Fauré’s Requiem (with the London Symphony Orchestra and Tenebrae, conducted by Nigel Short) was reviewed by Richard Morrison quite simply: 'Grace Davidson’s Pie Jesu is matchless.'

Grace’s purity of tone has attracted many of the leading contemporary composers to write for her, most notably Max Richter, who selected her as the solo singer for many of his works including Woolfworks, Voices, and Sleep. This piece—lasting all night—has now been performed all over the world, including a performance in 2019 on the Great Wall of China.

Recent solo recordings for Signum Records include Vivaldi & Handel, a disc of sacred solo cantatas with the Academy of Ancient Music and John Dowland: First Booke of Songes Or Ayres with lutenist David Miller, as well as Solace by Oliver Davis. 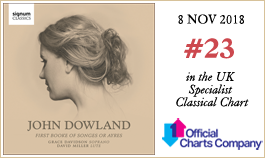 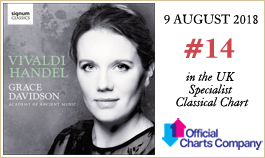