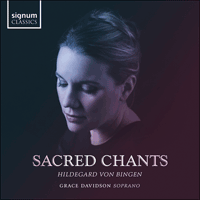 Although in some respects derived from monastic Gregorian chant, the surviving songs composed by Hildegard—Abbess of Rupertsberg in the twelfth century, and now Saint—go way beyond what she could ever have heard before, and remain arresting in their ecstatic melody even today. Nine are performed here, a lone voice drawing us into a world of visions.

Much medieval music is arresting because of its antique quality. Yet Hildegard’s melodies caress the 21st-century ear as postmodern mood music. In other words, Hildegard’s music is very old, but it sounds new. Moreover, Hildegard may have been an extraordinarily accomplished composer, but she was an immensely successful and powerful woman in many other areas as well. Hildegard was a scientist, a diplomat, a poet, and the founder of a religious community. Apart from the self-evident fact that she was a medieval woman, Hildegard was, figuratively, a Renaissance man.

Hildegard was a visionary: she exhibited visionary wisdom in her day-to-day life, but she also claimed to experience trance-like visions. Because of this, her opinion was sought by important people. But that favouritism also meant that Hildegard attracted adverse publicity in the hearts of a jealous few. Add to that the elitist behaviour and flamboyant headgear of the nuns within her order and it is easy to see why Hildegard might have stirred up resentment among those who wished her crown to slip.

Hildegard’s melodies arise out of Gregorian chant, yet Hildegard’s tunes are more self-consciously ecstatic than those of plainchant. Specifically, the wide voice ranges of Hildegard’s chants are suited to trained singers, and many of Hildegard’s gestures are idiosyncratic and virtuosic. In particular, the opening interval of a rising 5th (Ave generosa and O ignis spiritus) and a rising 5th followed immediately by a rising 4th (O Euchari and O Ecclesia) are hallmarks of Hildegard’s style. The florid imagery of Hildegard’s texts is matched by suitably florid tunes, whose calculated intervals suggest both vocal improvisation and carefully controlled composition. Hildegard had the ability to write tunes whose very essence is simultaneously spontaneous yet structured. And such was Hildegard’s character—on the one hand she was intensely practical, and on the other she was a vessel for dreams and visions.

Of the nine items on this recording, five are in honour of saints (Columba aspexit, O Jerusalem, O Euchari, O presul vere, and O Ecclesia)—respectively Saints Maximin, Rupert, Eucharius, Disibod, and the female Saint Ursula. Three are in honour of the Blessed Virgin Mary (Ave generosa, O viridissima, and O virga ac diadema), and one speaks of the Holy Spirit (O ignis spiritus). These nine items represent about one-ninth of Hildegard’s surviving musical output, as collected in ‘Symphony of the harmony of heavenly revelations’ (Symphonia armonie celestium revelationum) around about the year 1150. However, these 77 songs and one extended music drama form just one section of Hildegard’s written output; Hildegard’s music is augmented by a book of visions and books on natural history and medicine.

The inspiration for Hildegard’s texts are many and various, but easiest to latch onto are those where a specific institution or religious figure is the inspiration for a text and its music. Saint Rupert’s monastery, near Bingen, was the one over whose ruins Hildegard built her own institution in 1150; indeed it is probable that O Jerusalem was written for the dedication festival for Hildegard’s new convent. Columba aspexit and O Euchari were possibly written for the clerics at Trier, about 80 miles from Bingen. O presul vere and O Ecclesia are associated with Disibodenberg, where Hildegard was raised. Hildegard had been born in Bemersheim, in South West Germany, but she was given up by her aristocratic parents (Hildegard was their tenth child) when Hildegard was seven years old, and sent 30 miles away from Bemersheim to Disibodenberg. Relics of St Ursula were kept there and St Disibod’s was the monastery in which Hildegard was raised.

The pieces on this recording in honour of the Blessed Virgin Mary celebrate Mary’s fertility (O viridissima) and compare Mary to a flower (O virga ac diadema), while the hymn, Ave generosa, celebrates Mary’s chastity but in frequently erotic terms. It is these seeming contradictions and complex imagery that make Hildegard’s words and music what it is: a lattice of poetic melodies, which are coherent, though frequently unpredictable. Most personally of all, O ignis spiritus gives a picture of Hildegard as the recipient of the fire of the Holy Spirit. And here is the heart of Hildegard’s spirituality: she believed herself to be chosen and inundated with Pentecostal fire. Indeed, given the range of her achievements (and her extraordinarily innovative music in particular), Hildegard’s artistic inspiration remained at white heat throughout her adult life—creative powers that Hildegard attributed to the intervention of the Holy Spirit.

Many people will have heard, wondered at and been delighted by the Abbess of Rupertsberg’s music—Hildegard is, after all, the most recorded of medieval composers. Jeremy Summerly got me to sing some of her songs when I was at the Royal Academy of Music and I went straight out and bought a collected edition. The editor was Professor Christopher Page and he’s given me permission to use his translations for this album.

What many people may not know—I certainly didn’t—is that Hildegard not only wrote the music and the words but book upon book of mystical visionary theology, natural history, cures, and even what seems to have been the first morality play. Plus more than 400 surviving letters to Popes and Emperors and Kings, churchmen and churchwomen. She didn’t write a cookbook but even abbesses can’t do everything.