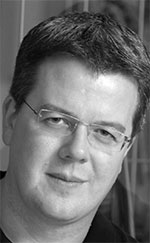 see also Paul Watkins (cello)
In the 2009/10 season Paul Watkins became the first ever Music Director of the English Chamber Orchestra, following two successful years as Associate Conductor. He also took on the role of Principal Guest Conductor of the Ulster Orchestra. He first came to public attention as a cellist but has also developed a flourishing career as a conductor, launched in 2002 when the jury unanimously awarded him first prize at the Leeds Conductors’ Competition.