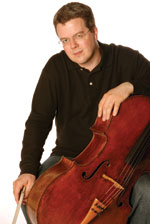 see also Paul Watkins (conductor)
Acclaimed for his inspirational performances and eloquent musicianship, Paul Watkins enjoys a distinguished career both as concerto soloist and chamber musician. Since winning the 2002 Leeds Conducting Competition he has also maintained a busy career as a conductor and in the 2009/10 season became the first ever Music Director of the English Chamber Orchestra, and also took on the role of Principal Guest Conductor of the Ulster Orchestra. As cellist, he has performed regularly with all the major British orchestras and made six concerto appearances at the BBC Proms, most recently in a televised performance of the Elgar Concerto. Outside the UK he has performed with the Netherlands Philharmonic Orchestra, the Norwegian Radio Orchestra, Melbourne Symphony, Konzerthausorchester Berlin, and the RAI National Symphony Orchestra of Turin. A dedicated chamber musician, Watkins has been a member of The Nash Ensemble since 1997, and he regularly performs with the world's finest musicians, including Menahem Pressler, Jaime Laredo, Lars Vogt, Christian Tetzlaff and Vadim Repin. He has given solo recitals at the Southbank Centre, Bridgewater Hall, Manchester and Queens Hall, Edinburgh, as well as recitals in New York, Boston and throughout Europe.