The BBC Singers perform an annual series of concerts at Milton Court Concert Hall in London and appear at the BBC Proms each year. Based at the BBC’s Maida Vale Studios, the choir also gives free performances in a number of venues, as well as making regular appearances at major festivals in the UK and beyond, with the vast majority of performances broadcast on BBC Radio 3. The world-class ensemble shares its enthusiasm and creative expertise through a nationwide outreach programme. 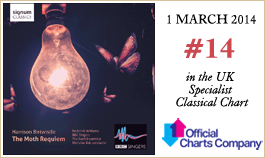