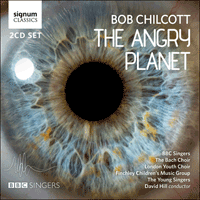 The Angry Planet & other choral works

A double album of new works to confirm Chilcott’s status as one of the most popular choral composers of today. The Angry Planet ('An Environmental Cantata' commissioned for the BBC Proms in 2012) sees the precision and skill of the BBC Singers and The Bach Choir conflated with the exuberance of a veritable army of young singers …

'As a resource, a set of excellent performances (especially of the title-work, with its demanding interconnected choirs), it’s a welcome addition to the catalogue' (Gramophone)
'This work … is a fine achievement, and simply adds to Bob Chilcott’s profile as one of the most brilliant composers of vocal music around today. He is also a major ambassador for the simple undying joy of singing' (MusicWeb International)» More

The three pieces recorded on this CD are all pieces written for, or pieces which include, young singers. I first wrote music specifically for young singers in 1994, when the conductor Jean Ashworth Bartle asked me to write for her choir, the Toronto Children’s Chorus, the Canadian tenor Ben Heppner, and players from the Toronto Symphony Orchestra. I went to the concert in the Roy Thompson Hall in Toronto before Christmas 1994 and the performance for me was a revelation. I discovered a world where fine musicians and teachers were mentoring young people to love singing and teaching them to sing to the highest level. I was drawn into this world principally as a composer but also, at first reluctantly, as a conductor. I loved the energy that the young singer had to give and found that their expression of singing, words, stories, and melody was a natural fit for what I had to give as a composer. I was drawn into an arena that embraced different musical styles in a way that was not judgemental, a world that was open and energetic. It also, if one got it right, drew a composer into a place where the ultimate reward was to write something that could be embraced and enjoyed without prejudice, and without reference to a perception of intellectual rigour or historical expectation. I found this to be very inspiring and immediate in terms of motivating a love of singing and showing how the voice can connect us deeply to our own culture, to our own language, and ultimately to a curiosity that can lead to the desire to understand and embrace a love of a wider musical heritage.

I have never been keen on looking back, but over the past 18 years as a composer and conductor I have been privileged to conduct tens of thousands of young singers in my own music and the music of many other living composers in what is to me a surprising number of countries: the United States, Canada, Brazil, Great Britain, Germany, Belgium, the Czech Republic, Denmark, Sweden, Latvia, Estonia, South Africa, Israel, Russia, South Korea, Japan, Singapore, Australia, and New Zealand. This made me realise that wherever one comes from, learning to connect with one’s own voice can have a deeply visceral effect on how one understands the beauty of what it is to express, to be vulnerable, and to share with others the mutual sense of how it feels to connect with one’s own emotional centre. It also made me understand the importance of giving young people the opportunity to take part in collective performance, whatever their age. By doing this they become artists at the point at which they take part and this, in my view, must be celebrated and enjoyed at that moment in time.

It is a particular pleasure for me that this recording has been motivated principally by David Hill, The BBC Singers, and The Bach Choir. David Hill is a musician who has shared his immense musical gifts with all types of musicians from the inexperienced amateur to the consummate professional. I have known the BBC Singers for nearly 40 years now, firstly as an ad hoc and staff singer, and since 2002 as Principal Guest Conductor. The Singers are a group of talented, intelligent, warm, and funny people who promote good singing with such spirit and grace. They have, through their own outreach work, quietly mentored a large number of young singers all over the country in a positive and giving way for more than ten years. The Bach Choir has also developed a very energetic and positive outreach programme and it is thanks to them that the groundwork for my piece The Angry Planet was so skilfully realised.

The Angry Planet was commissioned by The Bach Choir in 2011 and first performed as part of the BBC Proms in 2012. The text for this work, and also for the other two works recorded here, is written by the poet Charles Bennett, with whom I have collaborated on a regular basis since 2009. David Hill had the idea to commission a piece for The Bach Choir, The BBC Singers, a youth choir, and a choir of children on the subject of the fragility of our world and on our need to respect and care for our environment. The title was his, and it was on this theme that Charles Bennett developed the scenario of a forest at night, a place that here is chosen to depict this fragility. Through the course of the four sections of the piece, each one representing a three-hour period of night time, the concept of loss and fracture is depicted and traced through the voices of creatures in danger of extinction. This is articulated at various points in the piece by the mixed youth choir in an exaggerated spoken style—through the voice of the slow-worm, the wildcat, and the horseshoe bat, culminating in the voice of the corncrake chanting a litany of animals that have become extinct through time. The children’s choir, meanwhile, punctuates these movements with simple songs in which they play the role of hardy weeds and flowers that, despite so much loss, have managed to survive. As morning comes we see the signs of new life depicted by an otter with young, leaping through water. The work is brought to a close in an atmosphere of tentative optimism as the young singers respond like a flock of birds to the question “Can we learn how to live with this world?” with the answer, “Perhaps”.

Five days that changed the world was written for the Worcester International Festival for Young Singers which took place in the Summer of 2013. The brief was to write a piece on a unifying theme which could be sung by 400 young singers from 11 different countries, performed as the culminating piece in the final concert in Worcester Cathedral. On an earlier trip to Barcelona where I worked with a number of children’s choir conductors, I heard of a work written by the Catalan composer Antoni Ros-Marbà, based on five things that unified children’s lives, and this gave me the impetus for the theme for our piece. Charles and I came up with five events in history that we perceived had had a global unifying effect on our world, and these formed the basis for the poems that Charles wrote. Three of the pieces were designed to be sung with mixed choir and upper-voice choir and I added timpani to the piano accompaniment so the bass of the piano would have a chance of balancing with a large number of voices in the louder and stronger parts of the piece.

The Miracle of the Spring was composed for the choir of Magdalen College School in Oxford in 2013. The Director of Music, Jon Cullen, had previously performed a work of mine, The Making of the Drum, for choir and percussion, some years earlier with the choir of Latimer School in North London, where he was then Head of Music, and he wanted a piece from me that might inhabit a similar sound-world. Charles and I decided to write a piece on the theme of water. Charles had previously shown me a poem he had written, and the idea seemed particularly pertinent to me after a trip to the United States where the whole theme of shortage of water had been very much part of the conversation. The relatively simple percussion parts, designed in the first instance to be played by the singers, depict the flow of water through the use of mark tree and glockenspiel, and the dryness of the ground through a pair of log drums.

I am very grateful to David Hill, to The Bach Choir, The BBC Singers, The London Youth Choir, The Young Singers, and Finchley Children’s Music Group for their work and commitment to the realisation of this recording. I am very proud to see this come to life as a project which brings these different kinds of singers together as one. I am also grateful to my friend Charles Bennett whose wonderful poems give me the motivation to make them become sung words. Finally, I want to acknowledge the BBC Singers’ Producer, Michael Emery, one of the great advocates for choral music in the world, who has done his job for a good many years with unfailing commitment, enthusiasm, knowledge, and wisdom, and with a modesty that makes him deeply respected worldwide by people who love choral singing. He has also, most importantly, along with The BBC Singers, given voice and support to so many composers in Britain, and in doing so has enabled them to contribute positively to the choral energy that we have in this country.