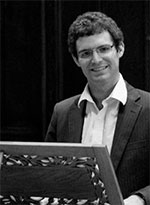 see also Benjamin Morris (piano)
Benjamin Morris is the Senior Organ Scholar at Jesus College Cambridge, and recently graduated with a double first in Music. During his time as an undergraduate he has appeared in services and concerts throughout the world, on radio and on CD. He has played chamber organ with the Choir of Jesus College in performances of Monteverdi’s Vespers, Handel’s Messiah and the St Matthew Passion, playing alongside His Majestys Sagbutts and Cornetts and Britten Sinfonia. As a student, Ben has also conducted Mozart’s Piano Concerto No. 20 in D minor, Elgar’s Scenes from the Bavarian Highlands, Beethoven’s Coriolan Overture and sell-out performances of Milhaud’s chamber opera, Le Pauvre Matelot.

With recent venues including Huddersfield Town Hall, Southwell Minster, St John’s College, Cambridge and the Buxton Festival, Ben is increasingly engaged as a soloist for recitals and other performances; he played in Elgar’s The Dream of Gerontius at St John’s Smith Square, in Britten’s War Requiem at Ely Cathedral under Stephen Cleobury, and in Beethoven’s Missa Solemnis under the baton of Sir Roger Norrington in King’s College, Cambridge. Before starting university, he spent a year as Organ Scholar at Gloucester Cathedral. Ben has performed on BBC Radio 4 both at the Buxton Festival and in a live broadcast with the Choir of Jesus College at the Oundle International Festival. He has studied with Gordon Stewart, David Briggs, Robert Houssart and Richard Pinel, and has studied harpsichord at the Royal Academy of Music with Terence Charlston. He is a prizewinning Fellow of the Royal College of Organists.